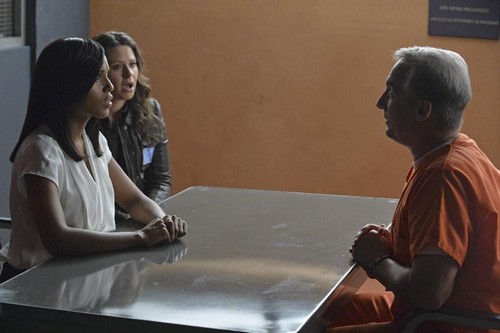 Tonight’s Scandal returned to ABC and we were treated to some more OMG moments.  I just cannot wait for the next episode, to wet your appetite we have some juicy spoilers and a sneak peek video of “An Innocent Man” which will air October 30th, for your enjoyment below!

On tonight’s show Olivia and the team continued to investigate Catherine’s case, but Olivia was distracted when Jake stopped returning her calls. Meanwhile, Cyrus fell deeper into the rabbit hole with Michael, David realized what it’s like to finally be a winner in DC and Fitz sought answers to Jerry’s death.  More happened!  Did you watch tonight’s episode?  We did and we recapped it right here for you.

Spoiler alert: If you’re one of those people who doesn’t like spoilers, stop reading now! We have some juicy spoilers for you about the season 4 episode 6 of ABCs “Scandal.”

Official ABC Synopsis: “Olivia is summoned by a convicted assassin who claims he was wrongly accused, and Mellie becomes intrigued by a former first lady whose stories seem to be strikingly similar to her own. Meanwhile, Elizabeth inches closer to corrupting the White House and Fitz makes a shocking move.”

On the next episode Olivia finds herself defending a convicted felon.  Mellie bonds with a former first lady.   Guest starring on the episode, Portia de Rossi (“Arrested Development”), Joe Morton, and Brian Benben (“Private Practice”) “An Innocent Man” was written by Zahir McGhee and directed by Jeannot Szwarc.

Scandal Season 4, Episode 6 “An Innocent Man” airs on ABC on October 30th, 2014. Check out the preview video and some photos from the episode below and let us know in the comments below what you think!