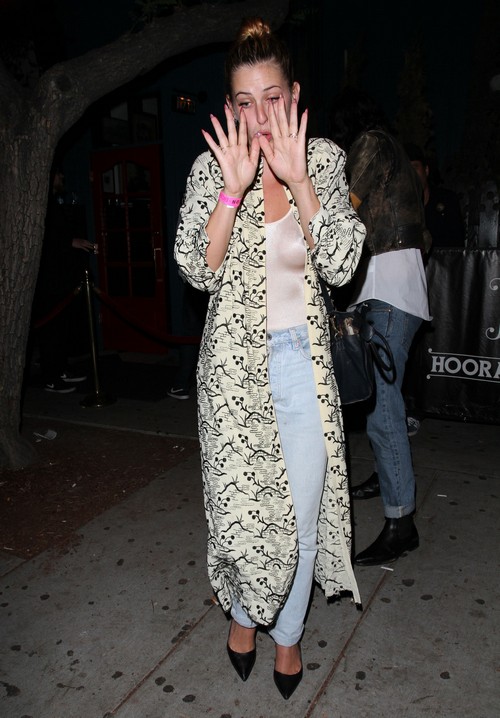 Celebrity children, beware. This is what happens when you don’t think your actions through – you’ll be met with derision and mockery, and it will be deserved. Scout Willis has never been as famous as her sisters or her parents, and I don’t know whether the lack of attention was just getting to her, but she did quite possibly one of the dumbest things a semi-famous person can do – go topless on the streets of New York City. That’s something that even the fame-whoriest Kardashian hasn’t done, and if you’ve surpassed the Kardashians in attention-seeking behavior, you know you’ve gone too far.

Sure, Scout claims to have gone topless – showing her bare breasts for the world to see – and documented it in order to protest against Instagram’s policy on female nudity, but how is that going to help her cause? Using the hastag #FreeTheNipple, Scout tweeted several pictures of herself topless on the streets of NYC, captioning the photos, “Legal in NYC but not on @instagram.” If you want to see the topless bare breast pics then click here.

Yeah, they’re not legal on Instagram for a reason. Instagram plays host to a range of people, from kids and teenagers to adults. Rightly so, Instagram is trying to protect the children and those with puritan sensibilities from seeing anything that they don’t want to see, and Scout is being an idiot if she doesn’t understand that. It’s not a feminist issue, and it’s not even an argument of equality – it’s not as though male nudity is allowed on Instagram either, so there’s no gender-based discrimination taking place here.

Granted, Scout is right when she says that it is slightly hypocritical of Instagram to allow scantily dressed women [who are showing practically everything but their nipples] to post pictures of themselves, but when it comes to breast cancer survivors, it’s deemed inappropriate for children. However, Instagram can’t really go on a situation-by-situation basis, and if they have to come up with rules for the entire community, there can’t be exceptions made. If breast cancer survivors are allowed to post pictures, then under the same rules, there would pictures of topless women in every other circumstance as well. Of course, what can we expect from the girl who was caught skinny dipping at the Chateau Marmont for shits and giggles?