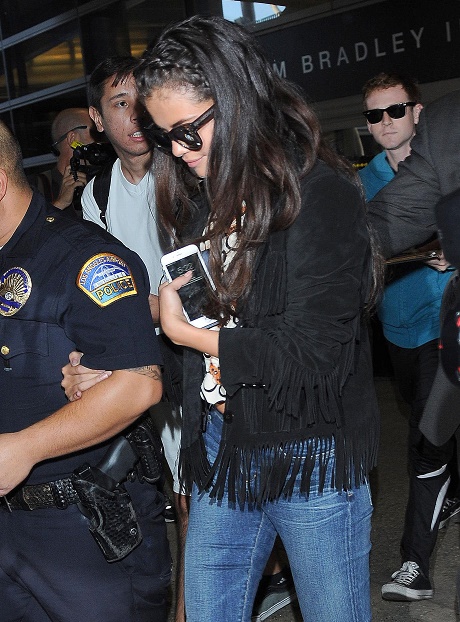 Selena Gomez wants Justin Bieber back but it’s looking like he’d rather date Kendall Jenner instead! Justin Bieber’s list of conquests continues to grow, as it expands to fit actresses, models, wannabe models, supermodels, Instagram models, and basically anybody who will sleep with him. Unfortunately, Justin has been working at increasing this list while he’s been dating Selena Gomez, which hasn’t gone over so well with Selena. Rumor has it that she’s dumped him – AGAIN – and unfollowed him on Twitter. Now, this marks the 57th time that Selena Gomez has broken things off with Justin Bieber, and we have a hard time believing that they won’t get back together two weeks from now.

In fact, we’re hearing that Selena is already begging Justin to take her back, because she clearly has no pride, and Justin somehow has a hypnotic pull on her. Seriously, what is Selena’s deal? How can she be SO BLIND when it comes to Justin Bieber, especially after repeatedly breaking up with him and dumping him, only to go running back to him the minute she’s changed her mind? Selena knows that Justin is a douchebag, that he’s a cheater, that he’s a user, and that will choose a supermodel over her any day. And yet, Selena keeps running back to his leash, because she can’t stand to see him with another girl? If it’s not ego, I seriously don’t know what else could explain it.

Now, even with that being what it is, Justin doesn’t even care enough about Selena to stay committed to her. While she’s off trying to win him back, Justin has been trying to add another notch to his belt – Kendall Jenner.

Justin Bieber and Kendall Jenner have gone on dates before, but they’ve never actually ‘dated’ – but Justin’s all set to change that. I guess his goal is to make his way through the Kardashian-Jenner family as well, probably partly to spite Selena and partly because he can. Will he succeed? Probably. Kendall Jenner’s not the most discriminating person on the planet when it comes to her boyfriends, and her only requirements seem to be fame and money. Kendall might as well kiss her friendship with Selena goodbye after this, but then again, they clearly weren’t that great of friends to begin with.