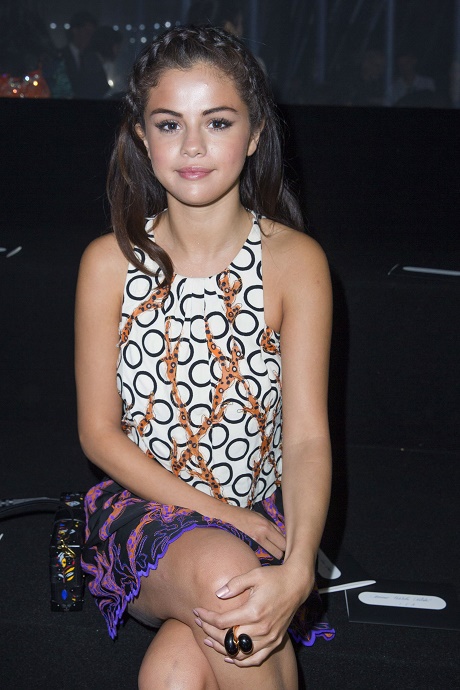 Selena Gomez and Miranda Kerr ran into each other during Paris Fashion week, and they decided to pose together for photos. You know, because it’s totally normal for the current girlfriend of Justin Bieber to be absolutely cool with his ex-fling. I mean, why not? Selena’s already proven that she doesn’t care who Justin hooks up with, so long as he keeps coming back to her.

If I was dating someone like that, I would have run screaming for the hills and/or tested myself for every available STD out there, but clearly, Selena Gomez feels no such compunctions. Even now, after everything Justin Bieber has done, including all the women that he’s reportedly had flings with, Selena is still sticking by Justin. In fact, Selena’s seems to have gotten more stubborn about staying in a relationship with Justin, no matter what he does or who he hooks up with.

Exhibit A: Justin Bieber and Kendall Jenner recently had a fairly intimate date last week, but what does Selena do? Oh, that would be absolutely nothing. She just decided to follow Justin to Paris as though it was no big deal.

Exhibit B: Selena runs into Miranda Kerr, who notoriously hooked up with Justin Bieber while still married to Orlando Bloom. Everybody knows about this because of Justin’s infamous fight with Orlando a few months ago, but again, what does Selena do? She poses for photographs with Miranda, ostensibly to show the press that there’s no bad blood between them. I mean, I get it – she doesn’t want to start tabloid drama. But also, does she have no guts at all?

We know Selena Gomez hates Miranda Kerr for hooking up with her boyfriend, but she goes ahead and poses with her. Jeez, grow a pair, Gomez. I mean, your boyfriend doesn’t have any trouble causing drama, and you’ve already changed everything about yourself to fit into his life – why not start having fights with people as well? Then, Selena Gomez and Justin Bieber can live happily ever after in the douchebag hall of fame. They’re already well on their way there, they just need a little extra push.