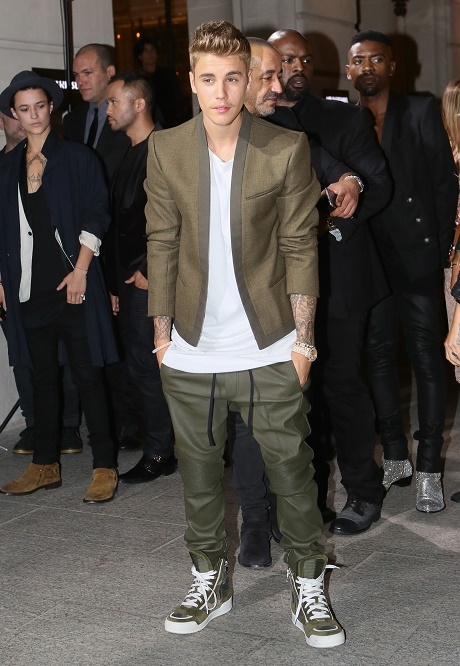 Selena Gomez and Justin Bieber just arrived in Paris together on September 30th because they apparently don’t have jobs or careers that require them to, you know, actually WORK. But what’s more interesting is the fact that Selena and Justin are still together, even though Justin’s been spending plenty of time lately with the likes of Kendall Jenner.

Justin Bieber and Kendall Jenner even went on a date earlier this week, but Selena Gomez is still willing to follow Justin halfway around the world. Sure, it’s Paris Fashion Week, so I’m sure Selena also has an ulterior motive in visiting the city [cough, trying to land a deal, cough], but she’s going with Justin.

By this point, Justin Bieber’s and Selena Gomez’s relationship would have crumpled under the cheating rumors, but even though Justin has proven himself to be an unreliable boyfriend, Selena’s still staying with him. The poor girl is absolutely besotted, and he couldn’t care less. Tragic? Yes, but at the same time, do we expect any different from Justin Bieber and Selena Gomez? I think not.

See, Selena may have been worried about Justin getting her pregnant last month, while they were in Toronto. But now, it’s just plain stalking and obsession. Selena Gomez is chasing Justin Bieber all over the country, following him where he’s going, visiting the same places he’s visiting, and generally being an extremely clingy girlfriend. Justin, on the other hand, seems like he’s trying his best to ditch her, short of just breaking up with her. He’s going on dates with models, he’s hanging out with the Jenners [Selena’s sworn enemies], and he’s not making an effort to hide any of this. In the past, it would have been enough to send Selena packing, but for whatever reason, she’s not giving up so easily this time.