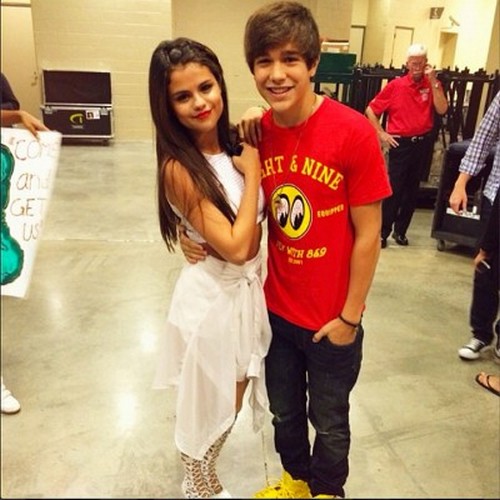 Selena Gomez is reportedly seeing Austin Mahone, an up and coming singer. What part of this sounds familiar? Apparently Selena’s chronically single BFF Taylor Swift helped make the love connection. Selena has been linked to Justin Bieber in the past is reportedly done with Justin and moving on with Austin. Selena knows what she wants and is apparently soliciting help from the underdogs of celebrity dating Katy Perry and Taylor Swift. When talking to Seventeen magazine, she shared, “I actually talked to Katy Perry about guys who are intimidated by strong girls.” She said. “I haven’t found someone yet who could understand my lifestyle, support it, love me through it and not be intimidated by it. It’s hard. I do think I scare some guys off because I’m like ‘I wanna change the world! I have dreams! What do you want to do?’ bust I only know how to be me.”

I have two very serious questions. The first question is fairly obvious. Why is Selena Gomez taking dating advice from Taylor Swift and Katy Perry? Taylor is painfully single and emotionally stunted. All of her reported relationships crash, burn, and become #1 singles. That’s not exactly a winning track record, and Taylor Swift’s sage advice is just asinine. To help Selena get over Justin Bieber, a young and immature singer Taylor’s suggestion is for Selena to date an even younger immature singer? And let us not forget Katy Perry. Katy may not have a large body count but she is currently committing an even bigger dating faux pas by even being seen with the epic tool otherwise known as John Mayer.

Dating John has got to be a cry for help. He has a horrible reputation as he can’t help bragging about the women he dates in great detail to whoever will listen. John Mayer may have a sweet voice but he is vile and slimy. Any man who equates his penis to a white supremacist and then claims not to be racist should be shunned by the female population. I’m just a regular ole girl, but if John Mayer came within 5 ft. of me, I’d make a homemade torch out of a stick and a dirty shirt to wave him off. Listening to either of these women is a classic case of the blind leading the blind and Selena might as well take relationship advice from Jennifer Aniston while she’s at it.

My second question is who does Selena Gomez think she is? She’s 21 years old and all this talk about changing the world and men being threatened by her are complete rubbish. In fact, I would argue that garbage men do more to change the world than Selena Gomez. If the men that brave the elements to take away my trash every week didn’t show up, I’d miss them. However, If Selena Gomez retired from lip synching, my ears would thank the universe. Why doesn’t she just slow down and put her energy into developing some sort of discernable talent instead of hitting high school commencements looking for a boyfriend? If I, in all of my infinite wisdom had to give Selena advice it would be to not take herself so seriously, because no one else does.