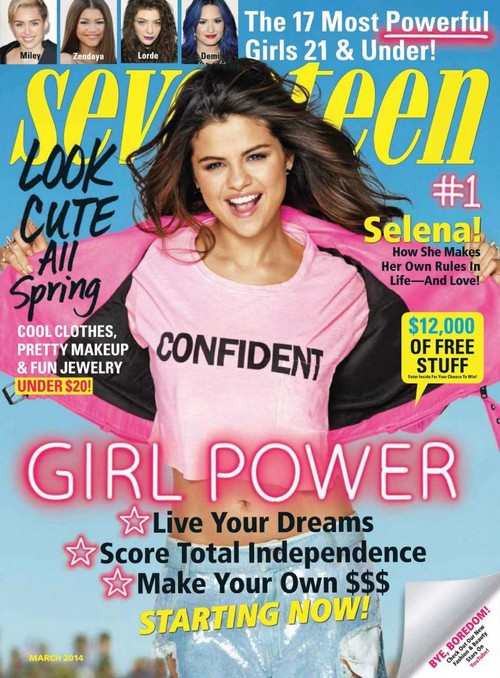 2013 was one hell of a year for Selena Gomez. She turned up on the big screen and dropped a new album that kind of announced to the world that she had grown up. She herself admits that she had been feeling defeated and needed to take control and prove to herself almost more so than anyone else, that she can be a strong woman. Lorde, another young singer who broke through last year has taken issue with Selena because she felt that Come and Get It was a weak stance for women to take.

In the latest issue of Seventeen Selena decided to be classy about the Lorde comments and praised the 17-year old for using her voice to accomplish great things. Selena also insists that she puts her close girl friends like Taylor Swift and Demi Lovato over any relationship with a guy. She realizes that these are the people that will be there for her no matter what else happens and that they are way more reliable than any man – especially junkie Justin Bieber! She also believes that Demi has taught her to be stronger by encouraging her to speak up and have a voice. Now if she wants something she’ll find a way to just ask.

As for that feud with Lorde, Selena says that they’ve never actually met but she believes that one day they will and it’ll be cool. She believes after a real conversation they could easily walk away friends. Can you imagine Selena and Lorde hanging out together? Is that a pairing that is even remotely realistic? Would they cruise for guys? Tell us your thoughts in the comments below!