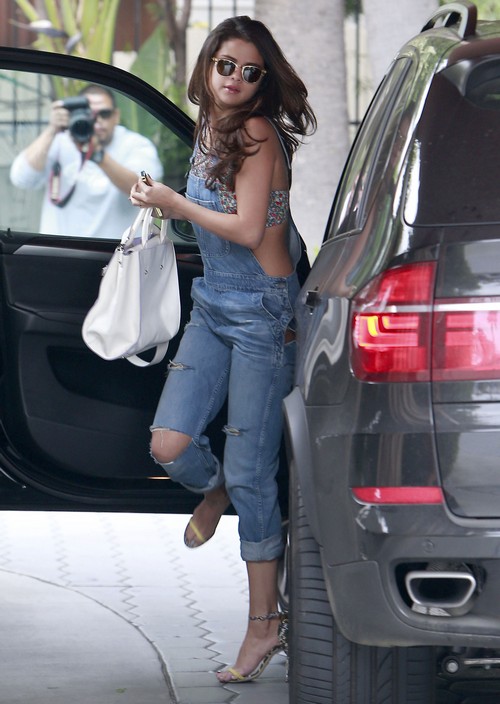 I don’t think anyone close to Selena Gomez approves of her renewed relationship with Justin Bieber. She has lost several of her close friends, like Taylor Swift and Demi Lovato who don’t want to be associated with Biebs in even the slightest way and Selena seems more than willing to watch them go. Selena repeatedly runs to be at Biebs side when he finds himself in legal trouble or is grabbing more negative headlines. I’m not sure if she likes to be knee-deep in the dysfunction too or just thinks that she can somehow save him from himself. Either way the relationship is toxic and Selena’s parents are beyond concerned.

According to the March 31st print edition of Life & Style her parents are looking to stage another intervention. They were thrilled when Selena agreed to get some inpatient help for anxiety and substance abuse issues. They perceive Biebs to be the catalyst to much of her unhealthy behavior and so going to rehab should have meant breaking contact with him. Instead Selena bailed after 2 weeks to rush to his side. Now her parents want Selena to return to The Meadows in Arizona to actually finish out the whole 6 week program that she had bailed on.

Now her parents are really flipping out. Selena was spotted at the Sunset Towers Hotel in West Hollwood on March 22 for a hookup with Justin Bieber. Sad Selena entered the hotel dressed in overalls and a few hours later emerged wearing a plain grey dress – how nice.

Do you think that Selena will agree that she still needs help? In the last few weeks she has been spotted out sloppy drunk and partying a lot – posting naked pictures of herself taken by Bieber – enjoying hotel hookups – all in all not very positive. Friends say that she drinks to get drunk. Will Selena decide that it’s time to sober up and move on from her toxic love affair with Bieber? Tell us your thoughts in the comments below!