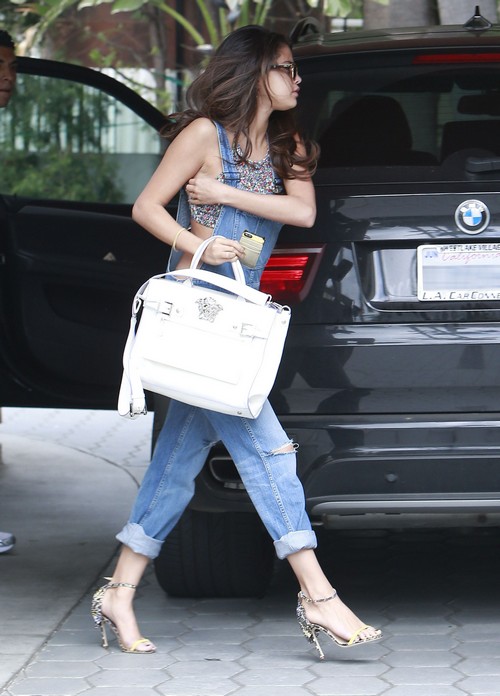 She did it again. Of course I’m talking about Selena Gomez and her total inability to stay away from Justin Bieber. It has been a few days since we were able to put them in the same place at the same time and so yesterday, there was a sighting. Selena was spotted be-bopping into the Sunset Towers in West Hollywood wearing overalls and emerged a few hours later in a gray dress with her hair piled atop her head. Once again girlfriend met up with Biebs for a quickie and then made a fast side door exit, hoping that no one caught on.

The truth is, everyone knows that she is still on the merry-go-round of what will probably end up being the most toxic relationship of her life. No wonder her family is planning yet another intervention to try and convince her to go back to The Meadows in Arizona to complete the program that she ditched out on back in January. Obviously Selena isn’t doing well. She has become another member of young Hollywood that is only mentioned for dysfunctional behavior or excessive partying. Think about it, in the last 3 months the only references to her in the media have involved Biebs, heavy boozing or being a general hot mess.

Do you think Selena will come to her senses anytime soon or instead are we going to watch as she continues to hotel hop with Biebs and party until she has to be carried out of various clubs? Tell us your thoughts in the comments below!

Selena Gomez stops by the Sunset Tower Hotel in West Hollywood, California on March 22, 2014. Selena showed up in overalls and left wearing a plain grey dress