Justin Bieber Turning To Justin Timberlake For Break Up Advice 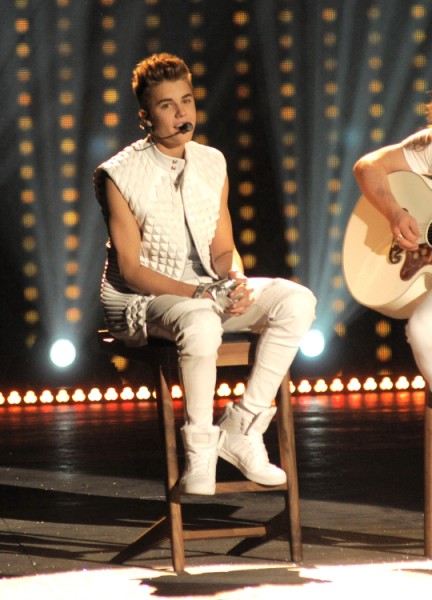 I knew it. First comes massive break up and heartache and then comes the sad sack ballad. I called that Justin Bieber would be the one to do it since Selena Gomez seems a tad more low key and he didn’t disappoint.

Just a day after the world found out that Jelena was over (though maybe not for good) Bieber took the stage and chose to perform Justin Timberlake’s ultimate break up song, Cry Me a River. I just got tingles! I love that song and remember how all of us were like “Oh no he didn’t” when Justin released it after calling it quits with Britney Spears. It was so awesome because it seemed to explain the break up and even insinuated that Britney had cheated but hard-ass Justin refused to take her back. And now he’s married and she’s on the X-Factor. Oh Justin, why couldn’t you have forgiven her!

I digress. So I understand why Timberlake wrote it but why did Bieber sing it? According to TMZ, Bieber has covered it over the last couple years but it’s very telling that he decided to sing it a capella the day after the big news broke. Did Selena cheat? Did Bieber dump her instead of the common thought that she let him go for trust issues? Or is this song about a young It couple going their separate ways just perfect to perform when your heart is broken, regardless of who did the actual dumping? I’m going with the latter. I still think Selena cut Bieber loose and he was all “Screw you, I was going to quit you anyway!” but now after he’s’ thought about it and the world is placating his broken heart he’s a total mess and crying all over the place. Bieber will be the Britney in this situation. Trust. Because other than his manager, does Justin Bieber have guy friends? It seems like his whole life was filled with his handlers and Selena. In that respect, he is very different from Timberlake. Yes, Timberlake had the luxury of a boy band to drown his sorrows in but he was going solo when his relationship with Britney exploded and had himself a good network of dudes to help him get over her as well. [Side note: These are the same dudes that Jessica Biel now hates]. Timberlake’s transition might not have been as smooth or gossip free had he not had his boys, right? That’s why I smell trouble for Bieber. I would NEVER, EVER tell ANYONE to look to Timberlake for ways to behave but, in this case, I’ll make one small concession.

Do you think Bieber will have more trouble moving on than Selena? In his own way, is Justin Bieber turning to Justin Timberlake as an example of how to move on? Is Bieber’s Cry Me a River indicative of that?