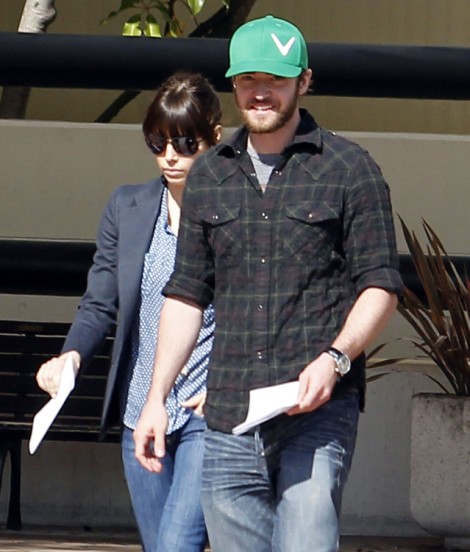 I’d hate to say I told you so Jessica Biel but shame on you for thinking Justin Timberlake was going to change just because you managed to put a ring on it. The Justin Timberlake/Jessica Biel honeymoon has hit a snag because Jessica’s trying to install all of her wifey privileges way too quickly. Apparently, since she secured the “jackpot” of last names, she thinks she can now tell Justin who he can and cannot be friends with. My guess? Justin wins.

“Jessica and Justin are suffering from a bad case of post-wedding blues. And it’s all because she wants him to dump most of his old friends,” a source told the National Enquirer. “All those guys en­joy weekend trips to Vegas, guys-only golf outings in exotic lo­cales and picking up hot chicks at clubs. And Justin used to be a big part of it. Jessica told Justin, ‘That’s it! Choose your stupid friends or me.’ Jess can’t stand how immature Justin’s buddies are. It bothers her that they always drag him into trouble. And now that Justin and Jess are married, she doesn’t want the guys coming over at all hours and crashing at their home. He told Jessica he’s not ditching his friends. And he added insult to injury when he added that he probably won’t be ready to start a fam­ily for at least two years. Poor Jess was left in tears. And now she’s wondering if marrying Justin was a major mistake.”

Really? You didn’t think the wedding was going to be a mistake when he cheated on you your entire relationship?

Now, I’m loathe to believe any old National Enquirer story – especially on a slow Friday – but it makes Justin look like a selfish douche so I’ll play along. The only thing I definitely don’t believe is that Jessica gave Justin the “it’s them or me” ultimatum. She might be new to this whole marriage thing but I can’t picture her being that dumb that fast. But I do feel sorry for her even though she is as naive as hell. She probably thought Justin would settle down and want to make babies after the wedding. That’s obviously where she is in her life. He doesn’t sound so ready which is totally OK unless, of course, he told he was just to shut her up. Hasn’t Jessica figured it out yet? The relationship is about him. EVERYTHING is about him! His friends know this which is why he’s not getting rid of them anytime soon.

Are Jessica Biel and Justin Timberlake fighting already, you think? Did Jessica really convince herself marriage was going to change their relationship?