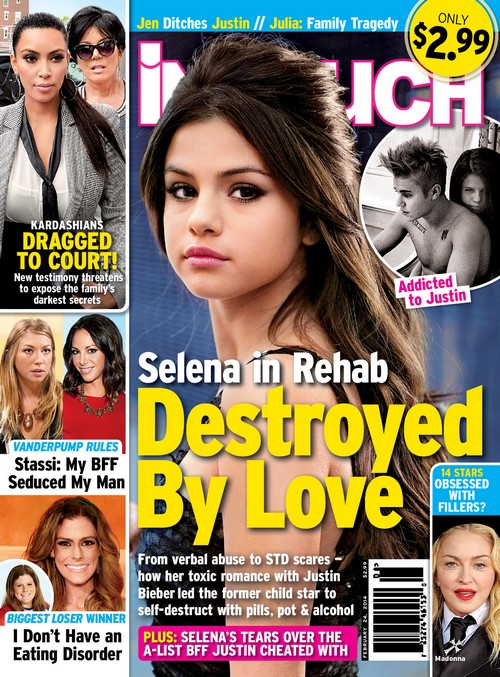 According to the latest cover issue of In Touch Weekly, Selena Gomez ended up in rehab because of Justin Bieber. Again, tell us something we don’t know.

The report goes on to elaborate on how Selena was heartbroken over Justin’s cheating, and how the constant threat of STDs plus the verbal abuse would often lead her down a self-destructive path of alcohol, pills, and pot. Pretty much everyone agrees that Selena’s romance with Justin was incredibly toxic for her, especially with Justin’s latest propensity to break the law. The Justin that she was with a couple of years ago versus the Justin that she was with recently are two very different people, and I don’t think she fully comprehended that before jumping back into a relationship with him.

However, she definitely figured it out the hard way. Practically the minute they got back together, reports were coming out about their alleged fighting over Justin’s model hookups. Plus, Justin’s just not in a place to be in a serious relationship, and while he definitely needs rehab, he doesn’t have the friend or family support net that would force him to go. Whereas Selena is very close to her family, and would have agreed to go to rehab if they held an intervention for her. See the differences between them? Even if they stayed together for a bit longer, they never would have lasted long-term – not anymore.

In Touch also has a report on how the Kardashians are being dragged to court over some new litigation that threatens to expose all their darkest secrets to the world. The Kardashians have more ‘dark secrets’? Don’t we know everything about them already?

Finally, the latest Biggest Loser winner in Rachel Frederickson has come under fire for losing ‘too much weight’, and Rachel is finally coming forward and claiming that she does not have an eating disorder, despite what people are saying.