Selena Gomez Gets Revenge On Barbara Palvin for Destroying Her Justin Bieber Romance by Having Hot Hookup with Niall Horan! 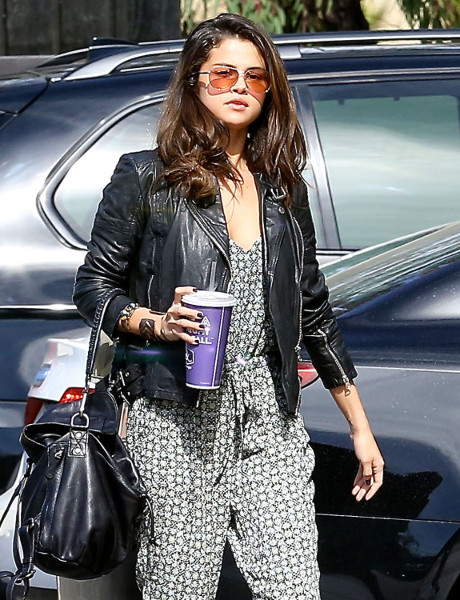 Even though she is no longer on Wizards of Waverly Place, it looks like Selena Gomez still has some magic up her sleeves. If you were thinking her recent date with Niall Horan was nothing more than a rebound hookup set up by her caring bestie Taylor Swift, then you might want to think again. Everything is not as it seems and, hopefully, Selena is being careful not to mess with the balance of things.

It was almost a week ago when we saw Selena looking somber while catching a flight out of LAX to go across the pond for some fun in London Town. It didn’t take too much speculating to know that girlfriend was up in her feelings over her former beau Justin Bieber and probably feeling some Valentine’s Day blues. Of course we would later find out that she was on her way to hang out with One Direction hottie Niall Horan – perhaps to get some lovin’ that she couldn’t get in Hollywood. But is this the sign of something new or was this meet up just a fling to get through the singleton’s most-feared holiday? We know how deep Selena’s feelings for Justin go – so chances are she’s having trouble shaking that lil’ dude from her mind. Let us take a trip down memory lane and recall the Justin Bieber and Selena Gomez split: a tragedy for the ages.

Back in November 2012, things started to get real ugly between the two when Justin Bieber was rumored to be flirting with model Barbara Palvin during the Victoria Secret fashion show. Justin was spotted backstage getting real cozy with Palvin, and there were even photos posted to social media as proof of their closeness. Justin was alleged to have spent some time with Palvin in Miami and taking in a New York Lion King play. This not only made Selena furious but it caused uproar over fans of “Jelena” and among Justin’s “Beliebers.” Poor Palvin even received death threats as a result of her affair with Justin, and she even went on record to vehemently deny the claims that the two were romantically involved.

But we all know where there is smoke, there is fire. Public and official statements do not change the truth of a matter, and in this case it didn’t change the public’s perception either. We all know how Justin Bieber gets down now, for sure, and we sensed he was a partying bad boy back in late 2012 when this all started to go down. Selena knows him better than any of us, so she definitely knew what was really up with him and Palvin. This is why, when the couple went on their New Years Mexico getaway, they had the blow-up fight that ended their relationship. It was over the Palvin hookup — that was the last straw for Selena. Trust that Palvin is not someone Selena has fond feelings for.

Now let us consider Niall Horan and how he figures into this web of love and confusion. Before Niall was heading in one direction towards Selena, he was pretty chummy with none other than Palvin. The two were spotted all over the UK having fun together. Many expected to see Palvin spending Valentine’s Day with Niall. Obviously Palvin did not spend Valentine’s Day with the 1D hottie, as she was spotted out with some other mystery guy. (Much to the surprise of some). However, because things were so hot and heavy between Palvin and Niall at one point, Palvin went on the record to clear up yet another rumor.

Speaking to Digital Spy, Palvin said of Niall, “He’s my friend. I’ve always been a girl [who] hangs out with boys, and I’m not going to change that, even though people write stuff about me…He’s a lovely guy- fun, Irish, sarcastic all the time.” In case you missed it, there’s a pattern here. Palvin has a fling with a guy and then releases a public statement to clarify that she is not dating the guy, whoever he may be. Let’s be honest, she is definitely hooking up with these guys on some level. Young, beautiful, and heterosexual members of the opposite sex usually do not spend a bunch of time with someone if there is not some sort of hooking up potential going on. Selena Gomez definitely knows this and she used it for her own little sweet revenge.

Now, maybe Selena didn’t concoct this all on her own. Taylor Swift probably knew what she was doing when she hooked Selena up with Niall, and Selena ran with it. Selena probably hopped on that Valentine’s Day flight thinking about how sweet karma can be with just a little touch of patience. She got to spend a few days drinking and loving up on Niall, which was probably a lot of fun for her. Killing two or three birds with one fun toss of a stone, she also had the opportunity to get under Justin’s skin and strike back at Palvin. Don’t forget that Bieber became angry with Niall during the 2012 Kid’s Choice Awards for flirting with Selena.

Man, it is true what they say. What goes around comes around. Selena finally got her revenge. It’s interesting that, not even a week after Selena hung out with Niall, Palvin ran to the press to squash any rumors of her dating Niall. There’s definitely some dirt in this laundry; help us wash it out. Leave your thoughts in the comments below!