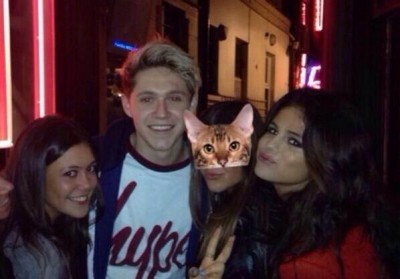 Selena Gomez really needs a lifestyle intervention, doesn’t she? She blew out of rehab a few week’s ago after staying only 14 out of the 45 days that the program entailed and where did she go, what did she do? Supposedly Selena’s family believes that this toxic relationship has become as much an addiction as any of the pills that girlfriend may still be popping.

We have also heard that she suffers from anxiety and melts down whenever Biebs isn’t returning her calls. What’s more pathetic than that? Hopping a plane to London on Valentine’s Day to go and party with the one guy that Bieber once threatened to back off or else. Way back in 2012 at the Kids Choice Awards One Direction’s Niall Horan was flirting up a storm with Selena and Biebs was pissed.

I’m sure Justin isn’t thrilled to see pics popping up online of Selena looking awfully close to the boy-bander this weekend. It makes perfect sense actually. Since obsessive Selena couldn’t get Bieber’s attention the right way she had to settle for whatever crumbs he was willing to throw her way. Of course it is an impossible situation for poor second-hand Selena – the world loves her but Justin couldn’t care less – he even laughed at taking her virginity and told the world that she was a stoner and a drunk!

Selena is in desperate shape. She is on an extended rebound from the man who was her first lover and her ticket to mega success.  Without continuing to date Justin Bieber Selena Gomez will be just about cooked professionally – which means she is cooked professionally since Justin doesn’t want her any longer. Obviously Selena wasn’t getting any loving from Bieber for Valentine’s Day so she hoped a plane and flew to Niall – pathetic.  Does Selena think that Justin cares who she sleeps with now? Over a year after their official split shouldn’t she have stopped playing games? Imagine how far Selena has fallen – running to Niall Horan for Valentine’s Day weekend like a desperate cheap spiteful loser  – trying to make Justin Bieber jealous! Tell us your thoughts in the comments below!

Selena Gomez tries to hide from photographers (and she should be ashamed) as she arrives at Heathrow Airport in London, England on February 15, 2014