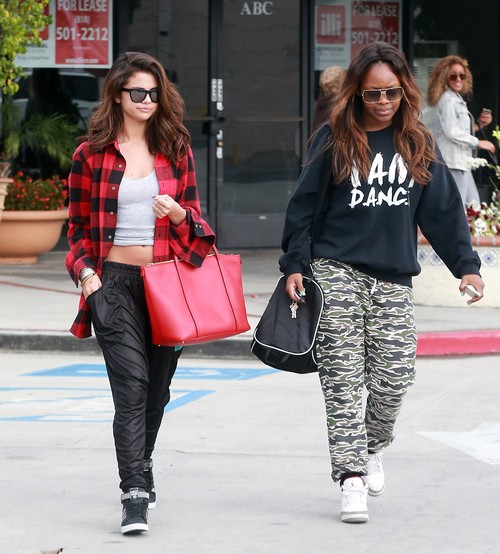 Looks like Cupid pulled a fast one on poor Selena Gomez and hit her with a poisoned arrow or something. A little over a month after the Disney starlet was spotted reunited and riding Segways with her egg-throwing ex-boyfriend Justin Bieber in his exclusive Calabasas gated community, word on the curb is that Selena is gearing up for a depressing Valentine’s Day. Heartbroken Selena has not one to come and get it and reportedly has plans of a somber celebration sans Bieber or any other man for that matter.

Now perhaps this somber approach is a coping mechanism Selena picked up during her recent rehab stint, where she supposedly checked herself in to overcome drug and alcohol issues related to her short lived romantic reconciliation with Bieber. I bet Selena wishes she could summon up some Wizards of Waverly Place style magic and make this whole relationship mess and Bieber disappear from her life.

Putting Bieber’s legal drama to the side, Selena has had to deal with public humiliation from the presence of Chantel Jeffries by Bieber’s side as he allegedly brags about taking Selena’s virginity. Oh there is also that little tidbit about Bieber calling Selena nothing more than a high maintenance drunkard who went to rehab to battle her own personal demons that purportedly has nothing to do with the Baby singer. So, this news on Selena’s Valentine’s Day plans should really come as no surprise.

So how does Selena plan to spend this holiday for lovebirds? A source told Hollywood Life “She wants to hang out with her single friends and have a girl’s night filled with pampering each other with mani-pedis and watching movies…She wants a man-free Valentine’s Day.” Now it is true that this sounds like a very mature decision on Selena’s part and an all around great idea considering the circumstances. But let us be honest here, Selena doesn’t have any other real choice in this situation.

For one, Bieber is clearly not interested in hanging out with Selena and probably only hooked back up with her on a nostalgic whim. Bieber is too busy jet setting with his new video vixen babe Chantel Jeffries, putting strippers’ breasts into his mouth and hanging out with rappers as he now has hood points. He has talked so much trash about Selena up to this point that even if any other guys are interested in dating her, it would be in her best interest to give her ego some time before embarking on any new romantic endeavors. Bieber has put her through the ringer and this was the chance she took by dating him; now she has to deal with the consequences of her decision. Unfortunately for Selena, this means it is time to nurse her broken heart back to health.

Hopefully Selena will enjoy Valentine’s Day as much as possible. Since it seems by most accounts that Selena enjoys indulging in alcohol, hopefully it will not hinder her progress since leaving rehab by having a glass or two. This Valentine’s Day is going to be difficult for Selena and she will need all the support and help she can get to survive it emotionally intact. If she chooses to invite bestie Demi Lovato over, she may want to take one more cue from her former beau Bieber and put her wine in a water bottle though. Not much dirt here, but help us wash out whatever you can in the comments below.