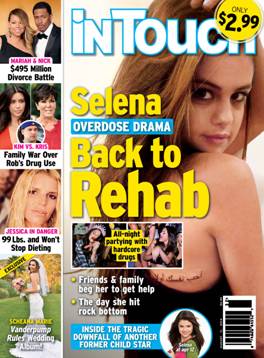 Selena Gomez has been in the spotlight for all the wrong reasons recently. In the wake of the news that her ex-boyfriend, Justin Bieber, and her one-night stand, Orlando Bloom, had a little fight in Ibiza yesterday, new reports are now claiming that Selena is headed back to rehab. Who didn’t see this coming from a mile away?

Selena’s been exhibiting behavior indicating a meltdown for a few months now, starting after her most recent reunion/breakup with Justin Bieber. She seemed like she was getting back on track and cutting out all of the negative influences in her life after the Coachella music festival. But that lasted approximately 0.2 seconds, and she was back with Justin and partying like it was her job. She was day drinking, hanging out with a REALLY bad crowd, and spotted smoking, doing drugs, and getting wasted on a regular basis.

After what she went through in January, you’d think she would know better, right? Not. Unfortunately, addiction doesn’t work that way, and Selena really should have stayed in rehab longer than a few weeks. As In Touch Weekly’s latest cover issue explains, Selena’s started partying with hard core drugs and is perilously close to hitting rock bottom. Her friends and family are reportedly begging her to get help, although they’ve already held an intervention for her and gotten nothing for it. But sources tell In Touch that Selena’s come close to overdosing, and that might have woken her up to the dangers of continuing to live this way. Whatever it is, let’s hope that Selena does go back to rehab – it’s either that, or end up like her ex-boyfriend: a druggie and a social pariah, to boot.

In Touch also has a feature on the Kardashian ‘family war’ over Rob Kardashian‘s drug use. Isn’t it sad that instead of addressing the root cause of his drug use [i.e. depression], they’re just trying to put him back in rehab?

There’s also a story focusing on Jessica Simpson‘s extreme weight loss, and how she’s already at 99 pounds but won’t stop dieting. Yeah, me thinks that it’s the Weight Watchers deal that’s causing that, but maybe Jessica’s just overdoing it after all these years of gaining weight.