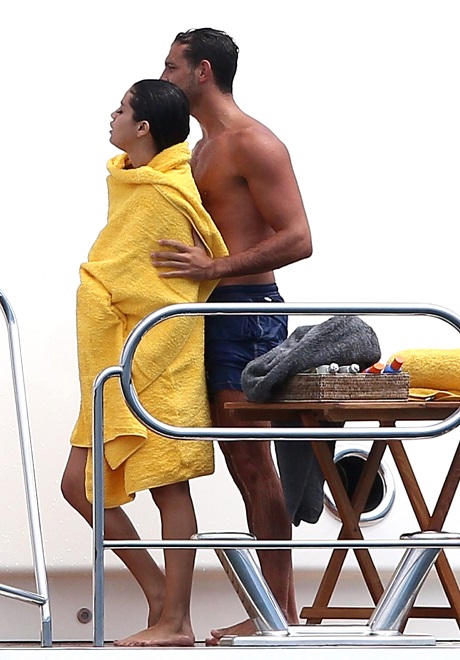 After dating someone so immature for so many years, I suppose it was just a matter of time before Selena Gomez went the exact opposite direction and ended up with an older businessman. She and Justin Bieber called it quits a few weeks ago, but that hasn’t stopped Selena from partying it up every chance she gets.

Selena and notorious party animal Cara Delevingne are currently in St. Tropez to celebrate Selena’s birthday [actually, that’s why Selena’s there – Cara’s probably just there to get drunk and high]. And surprise, surprise [not], Selena was spotted with her new beau, businessman Tommy Chiabra.

The couple was seen jumping off their yacht into the water below, and they were also photographed drinking, smoking, and dancing on their Ecstasea yacht. Hear that, folks? ‘Drinking, smoking and dancing the night away’ was the exact quote used by the photo agency, and the photographs definitely prove that. Selena’s not exactly hiding her partying, is she? Has she just stopped caring what the public thinks of her, especially as she spirals down the deep end of alcohol addiction again?

The girl literally got out of rehab a few months ago and even after what she went through earlier this year, she’s already back to drinking and smoking on a regular basis. She may have cut Justin Bieber out of her life for being a negative influence, but right now, there’s nobody worse for her than herself. And what’s more pathetic, her new boyfriend clearly doesn’t care that Selena’s ruining her health. He’s probably just happy to be invited to the party in the first place.

What do you guys think of Selena’s new boyfriend, and her constant partying and drinking? Do you think she’ll end up back in rehab? Let us know your thoughts in the comments below.