Is Selena Gomez Hooking Up With Cara Delevingne – Are They Lovers? (PHOTO) 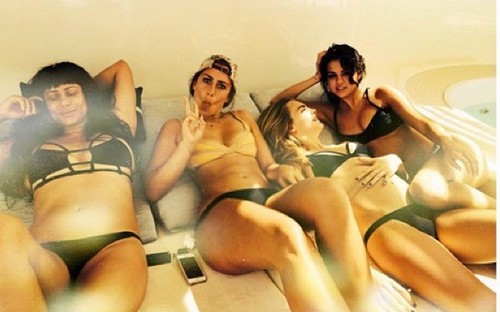 Cara Delevingne is certainly making her way around Hollywood, isn’t she? First Michelle Rodriguez, now Selena Gomez. Cara and Selena were spotted partying it up in St. Tropez for Selena’s 22nd birthday, and although there were plenty of mystery hunks around, Cara and Selena seemed inseparable. Could they be also be engaging in some hookups?

The last time Cara spent this much time with another person was Michelle Rodriguez, and even though the two initially denied rumors of a romance, the truth came out eventually. I’m sensing the same pattern with Cara and Selena, although Selena really should be avoiding hanging out with someone who parties so much.

There’s no denying that Selena has officially gone off the rails this time, and it’s worrying to her fans that she’s hanging out with Cara so much. Whether they’re hooking up or just friends, Cara is not the best influence on anyone, much less someone so emotionally vulnerable as Selena right now. She just broke up with Justin Bieber, and she’s a mess. She keeps Instagramming messages about loving yourself, and all of her actions state otherwise. She’s getting tattoos, she’s getting drunk every chance she gets, she’s partying non-stop, and she’s stopped caring about her career.

Hanging out with Cara Delevingne will not solve any of those issues, and will probably make the partying and drinking worse. Cara’s infamous for her wild partying antics, and if Selena’s already in her inner circle, then she’s clearly following the same routine. How long before we expect to see Selena back in rehab, especially if she and Cara have an explosive relationship fall-out in the same vein as Justin and Selena?