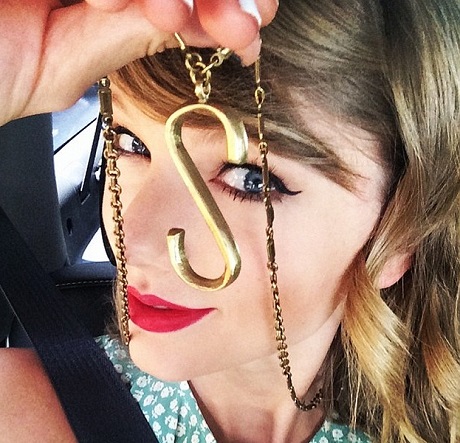 It’s Selena Gomez‘s birthday today and it appears as if she’s been given a wonderful gift — the gift of Taylor Swift‘s love! And, honestly, who doesn’t want that in her life? Rumors have swirled for months and months of T-Swift and SelG0’s feud, a broken friendship that primarily resulted from the two girls’ differing opinions on Justin Bieber. Of course, Selena chose to stick by Justin Bieber, even after Taylor Swift undoubtedly voiced her disapproval of the relationship — a relationship that everyone knew to be a toxic one and absolutely no good for Selena.

Essentially, Taylor was just trying to look out for her friend’s best interest. Whatever came between them must’ve been squashed (or is in the process of being squashed) because Taylor sent out a selfie via Instagram of herself holding up her signature “S” necklace. Alongside the photo, Swift wrote, “Usually this S represents ‘Swift’ but today I’m wearing it because SELENA IS 22!!!!”

We’re eager to see what becomes of their relationship in the coming months. At one time, they were the best of besties, and it would be a glorious occasion should they choose to revive their glory days.