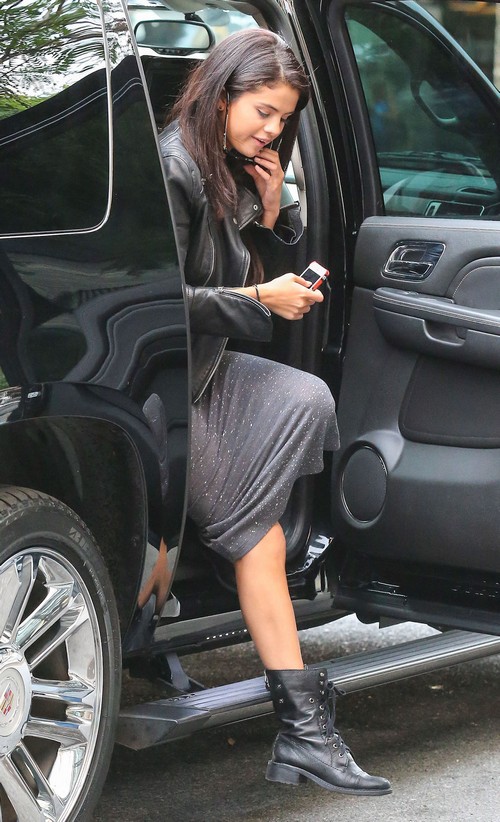 Selena Gomez is going down the rabbit-hole of alcohol addiction, and friends fear that she may not be able to come out of it without serious rehab. The singer was spotted getting drunk in New York City on more than one occasion, and paparazzi managed to track her day-drinking with startling clarity on Wednesday. She started off drinking at Williamsburg hotspot The Bedford, and then proceeded to Tao Downtown. She then hit up the club Marquee and stayed there until 2 A.M., but not before arriving at the Bowery Hotel, completely wasted.

The pictures from the Bowery Hotel show Selena sloppy drunk, grinning and unsteady on her feet. Sources say that this kind of behavior has become increasingly common with Selena, especially after her most recent breakup with Justin Bieber. Selena’s family has also reached their wit’s end on how to deal with her, especially since she’s cut off contact with them and is refusing to attend rehab. She supposedly refused their intervention, and she’s no longer listening to anybody when it comes to her partying.

There’s also her most recent breakup with Justin, which sources say led to this latest bout of non-stop drinking and partying. Selena recently indicated that things weren’t going very well between them when she posted this quote on Instagram: “The moment you compare yourself to another woman, it weakens you, and I’m not here for that. Once you know that reality & claim your space, your life becomes easier.”

This came right after Justin’s pictures with Yovanna Ventura went viral, and were clearly a response to them. However, I don’t think that Selena realizes that by acting the way she has, she’s only harming herself in the long run. Plus, does she really want to be the pathetic girl that lost her cool over Justin freaking Bieber? Come on, everybody’s better than that.

Selena Gomez is seen arriving at The Bowery Hotel in New York City, New York on July 10, 2014. Selena took a shot at her on-again off-again boyfriend Justin Bieber by posting this quote ‘The moment you compare yourself to another woman, it weakens you, and I’m not here for that. Once you know that reality & claim your space, your life becomes easier.’ on Instagram after Justin posted pictures of him and his new girlfriend Yovanna Ventura.