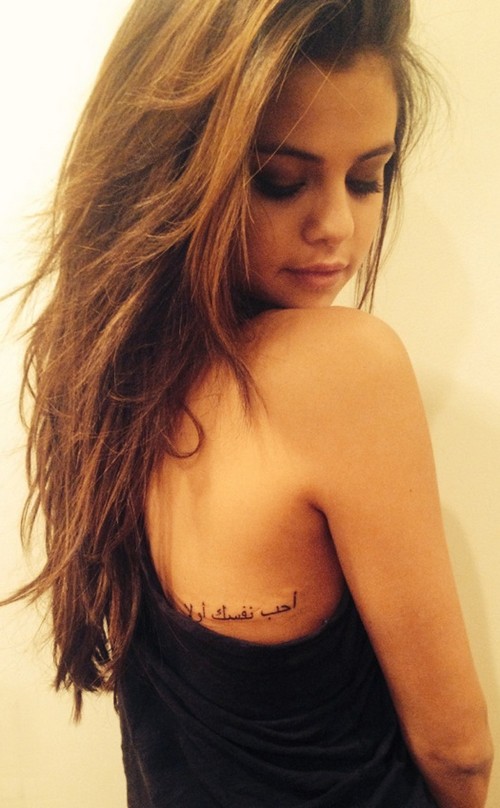 Selena Gomez has been in the midst of a personality crisis for a while now, and that crisis is showing no signs of letting up. The latest sign of her internal meltdown is her new tattoo, which is placed on her back and contains the Arabic words for ‘Love Yourself First’.

Is Selena really stupid enough to get a tattoo reminding her to love herself? Is this self-esteem issues talking, or substance abuse talking? Because I don’t think a breakup can have THIS much of an impact on anyone, much less a celebrity who’s been in an on-again/off-again relationship with Justin Bieber.

No, it definitely feels like Selena’s other issues are coming into play here, including her rumored alcohol and drug abuse. She can’t think straight with all the drinking, and she probably got the brilliant idea to get herself this tattoo in the wake of another night of binge partying.

And lest Selena’s team responds with an ‘Oh, but it was all Justin’s fault!’ story, we can come up with several incidents in the past two weeks alone where Selena was spotted getting wasted WITHOUT Justin by her side. And of course she’ll try to pass this tattoo off as Justin’s fault, when in reality, it’s what most tattoos are – drunken mistakes.

Let’s not forget that Selena’s own Grandpa leaked that the star is suffering from lupus and is supposedly in treatment for the disease. This can’t make things any easier, right?

When – and if – Selena recovers from this largely self-induced mess that she’s created for herself, she’ll have that tattoo as a permanent reminder not to sink back into her dark place again. Until then, I wouldn’t be surprised if she continued on her trend of making very public mistakes.