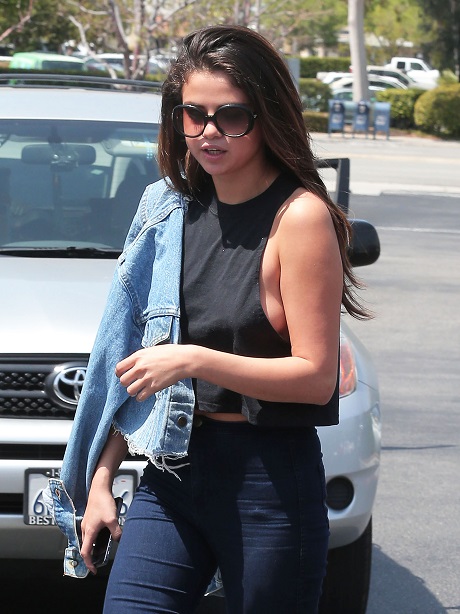 Justin Bieber and Selena Gomez continue to establish themselves as Hollywood’s most screwed up couple, as Selena continues to validate Justin’s douchebaggery and Justin continues to lead Selena down the path of temptation and self-destruction. And lest you think we’re being hyperbolic, remember that Selena was in rehab less than six months ago.

Although Selena seemed to be taking a turn for the better after the Coachella music festival, it turned out to be a false alarm. She may have had a moment of clarity and removed all the negative influences from her life, i.e. cutting off Kylie Jenner and Kendall Jenner, and removing all of them from her Instagram. But whatever it is that led her to her epiphany clearly failed.

We first reported that Selena and Justin were back together a few weeks ago, but it looks like they’re getting very serious very quickly. They’re spending all their time together, and most of that time consists of them getting drunk or getting high. According to reports, Justin even got Selena drunk and high before taking her to Knott’s Scary Farm in California. Forget the fact that if Justin truly cared about his so-called girlfriend, he would be trying to help her get better, not worse.

A source told Radar Online, “Everyone smoked, including Selena. We smoked at least six joints and were high as a kite by the time we rolled into Knotts.”

So much for Selena realizing that Justin is a bad influence, huh? All her realizations and life changes are a moot point if she doesn’t make those changes permanently. In the end, she’s the one who’s going to end up back in rehab if she doesn’t take care of herself. She clearly has a low tolerance for alcohol and drugs, and just because her on-again/off-again boyfriend smokes all the time doesn’t mean that she should follow in his lead. The whole world knows that Justin is a lost cause – does Selena want to end up like him? Or even worse? Because that’s the path that she’s on right now.