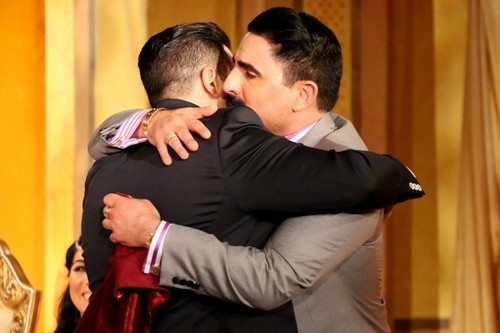 Tonight on Bravo SHAHS OF SUNSET continues with a new episode called, “Reunion Part 2”  On tonight’s show the Shahs continue to hash out all of the drama, excitement, ups and downs of the third season.  Did you watch last week’s episode?  We did and we recapped it right here, for you.

On last week’s episode Bravo capped off the explosive third season of Shahs of Sunset with the first of a two-part reunion when Reza, MJ, Mike, Lilly, Asa, and GG sat down with Andy Cohen for the ultimate Farsi face-off.

On tonight’s episode Reza, MJ, Mike, Lilly, Asa, and GG continue to hash out all of the drama, excitement, ups and downs of the third season with Andy Cohen.

Tonight’s episode is going to be filled with more crazy Shahs Of Sunset drama that you won’t want to miss, so be sure to tune in for our live coverage of the show tonight at 8 PM EST! While you wait for our recap hit the comments and let us know how excited you are about the new season of The Shahs of Sunset!

Tonight is Part 2 of the Shahs of Sunset reunion, hosted by Andy Cohen. Andy jumps right in and brings up Reza’s feud with Sasha, and how Mike took Sasha’s side over Reza’s. Mike calls Reza a hypocrite, and claims that he wasn’t going to stand by and “let Reza bully some kid.” Reza apologizes profusely for everything that he said to Sasha, and admits that he was wrong. But, Reza is still hurt by Mike taking Sasha’s side. He wasn’t upset that Mike stood up for Sasha, he was upset that after the fact Mike thought he was superior to Reza and wouldn’t talk to him.

Next, Andy brings up the Shahs’ trip to the Middle East. Asa confesses that their trip to Turkey was “completely life changing for her.” Reza admits that the wardrobe in Istanbul “freaked him out.” Mike was scared when he was in Iran though, because his parents were Jewish and their family was persecuted in Iran for their religion. Lilly reveals that she doesn’t think Iran is scary, they don’t have a problem with gay men (like Reza says), they actually will give gay men a free sex change in their country.

Next, MJ discusses her epiphany in Iran when she realizes she wants to have a baby. MJ confesses that she is hoping to find a true love that she can have children with. Andy brings out MJ’s Mom Vita to discuss MJ’s realization that she wants to have kids of her own. Vita says she likes some parts of Shahs of Sunset, but other parts she hates. She didn’t like when MJ took off her clothes on TV and she doesn’t like that that Reza calls everyone a “bitch.” Andy asks Vita if she thinks MJ will be a “good Mom.” Vita says first MJ “has to make herself pretty for a husband and get married.” She also confesses that she didn’t want to have kids and MJ was not planned.

Andy addresses one of the main storylines this season on Shahs of Sunset, Mike and Jessica’s relationship. He wants to know why Mike still hasn’t proposed to Jessica. Mike says that he is 100% devoted to Jessica, but he is just scared because once he pops the question, kids are going to come right after. He definitely plans on marrying Jessica, he just is trying to buy more time.

Mike begins crying and confesses that he feels like he lost one of his best friends, because him and Reza don’t even talk anymore. According to Mike the reason he got so drunk on the show was because he was “mourning the death of their friendship.” Reza tells Mike he “doesn’t love him any less, he just doesn’t like him right now.” Reza starts crying too, and says that he wishes they could rewind their friendship. Reza and Mike apologize to each other and hug it out.

Lilly is touched by Mike and Reza making up, and she announces that she wants to be back in the group, and seeing them all together “melts her heart.” Reza announces the he will “forever love all of his friends from the time he leaves the table until he lays his head down for the last time.”