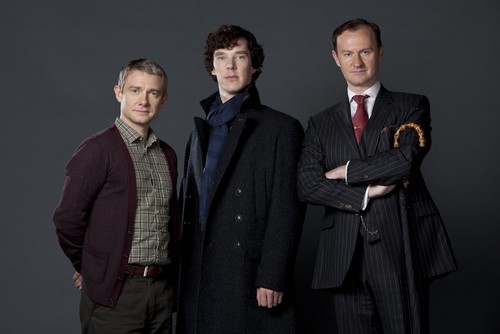 Tonight on MASTERPIECE on PBS one of television’s most anticipated series SHERLOCK returns with its season 3 premiere.  If you have never watched the show before Benedict Cumberbatch and Martin Freeman return as Sherlock Holmes and John Watson.

When season 2 ended it was said to be one of the most shocking season finales on television.  Fans headed to the internet to talk about whether Sherlock had died and to discuss what had happened.  Viewers have had to wait two years to find out if Sherlock survived a suicide.

Tonight’s season three is set two years after the devastating effects of [Series 2’s finale] The Reichenbach Fall, Dr John Watson has got on with his life. New horizons, romance and a comforting domestic future beckon. But, with London under threat of a huge terrorist attack, Sherlock Holmes is about to rise from the grave with all the theatricality that comes so naturally to him. It’s what his best friend wanted more than anything, but for John Watson it might well be a case of ‘be careful what you wish for’! If Sherlock thinks everything will be just as he left it though, he’s in for a very big surprise…

Tonight’s Sherlock season 3 premiere is going to be great, and you won’t want to miss it. So be sure to tune in for our coverage of Sherlock — tonight at 10 PM EST!  While you wait for our recap, hit the comments and let us know how excited you are about the new season of the Sherlock? Check out a sneak peek video of tonight’s episode below.

Tonight’s episode of Sherlock (Mystery Masterpieces) opens with a man running through the woods, and being apprehended by soldiers with guns.  They take the man in into a prison cell, which looks more like a torture chamber.  The soldiers have their prisoner chained up.  One of the soldiers whispers to the prisoner that “there is an underground terrorist movement in London, and an attack is imminent.”  He pulls the prisoner’s head up and reveals his face..it’s Sherlock Holmes.

John has no idea that Sherlock is not dead.  He hasn’t been dealing with his death well.  John is “moving on” though, and preparing to marry a woman named Mary.

Sherlock is getting cleaned up, and preparing to head back to London to handle the terrorist problem.  According to Sherlock he has no intention of “being seen with John Watson.”  He does plan on “popping up” and surprising Watson though.

Sherlock heads to London to “pop up” and surprise Watson.  He goes undercover and poses as a waiter at a restaurant where John is having dinner with his girlfriend.  While John is trying to propose to her, Sherlock “pops up.”  He shocks John, and ruins his proposal.  John is speechless, but his girlfriend is not happy to see Sherlock.  She says he is “supposed to be dead.”  John wants to know “how he could do this” to him.  John attacks Sherlock, and tackles him to the ground.  After John is done trying to strangle him, Sherlock, John, and John’s girlfriend head to a diner to discuss why he isn’t dead.  John wants to know why Sherlock didn’t tell him he was faking his death.  Sherlock confesses that his brother and Molly Hooper were the only ones that knew he was alive.  John attacks him again.  When they are done brawling for the second time, Sherlock confides in John that London is in danger and he needs his help.  John punches him and gives him a bloody nose. Then Mary and John leave him standing on the street corner.

Sherlock pays Greg a visit next, Greg is much more happy to see him alive than John Watson was.  Sherlock tells him it is “time to come back to work.”

Meanwhile, “The Empty Hearse,” is meeting discussing Sherlock theories.  The club has spent the past two years theorizing about how Sherlock Holmes isn’t really dead.

The terror alert has been raised to “critical.”  Sherlock and his brother Mycroft are busy arguing over the “secret terrorists,” that Sherlock has returned to London to stop.  Sherlock has created a photo-collage of the potential terrorists and has begun tracking them.

While John heads to work at the office.  Sherlock sets up office, and begins seeing clients again.  John is a little stressed since he found out Sherlock is alive, and he snaps on one of his patients and accuses him of being Sherlock.  After trying to pull off the old man’s beard, he realizes it is not Holmes, but really an old crazy man.

Greg and Sherlock head underground to investigate a skeleton.  Sherlock realizes that the whole skeleton is a fake, it hasn’t been there for hundreds of years, someone placed it there in the last 6 months.

Sherlock pays a fan of his a visit.  He has some security footage from a train station to show to Sherlock.  A passenger boarded the train in West Minister, and when it arrived at the next platform, the car is empty.  Sherlock recognizes the face of the vanishing passenger in the security footage.

Meanwhile John is walking down the street, and two men attack him and stab a needle in his neck.  John drops to the ground.

Molly Hooper is working with Sherlock on the case of the disappearing train passenger.  Sherlock instructs her to find maps from the train routes.  Then he realizes she has an engagement ring on, she met a man “through friends” and they plan to get married.

Mary is headed to Mrs. Hudson’s house, when she receives a cryptic text message.  She barges into the house and tells Sherlock that someone has John Watson.  They run outside and hijack a motorcycle together, and head to the location the text message instructed them to.  They arrive at the location, and find a group of people gathered around a huge bonfire.  They light the immense tower of boards on fire, and then they hear screaming.  John is tied up inside the fire.  Sherlock manages to pull him out as the tower of wood is engulfed in flames.

John wants to know who kidnapped him and tried to burn him alive, Sherlock has no idea who was responsible for the attack on Watson though.  Sherlock confides in Watson that one of the men he thinks is linked to the underground terrorism group, disappeared on a train.  Sherlock pulls up the security footage and shows John, then he realizes that the man didn’t disappear.  The entire train carriage that he was riding in disappeared.  The driver of the train must have detached it somewhere underground.  The underground terrorism group is literally meeting underground, in a train carriage.

Sherlock realizes the terrorist group will attack today.  Parliament is meeting in London to vote on a bill that will outlaw terrorism.

Sherlock and John head underground to locate the bomb,  John wants to call the police first but Sherlock won’t allow it.  Once they get underground it is too late.  They have no cellphone service.  Sherlock was wrong though, the train carriage isn’t underneath the Parliament building where he expected it to be.  They head down another tunnel, and find the missing train carriage sitting abandoned in the tunnel.  They pry open the doors and board the train, searching for explosives.  They realize the train carriage isn’t carrying any bombs, the entire thing is a bomb.  The seats, floor, and walls are lined with explosives.  While they are on the carriage all of the lights on the train light up, and they hear a beep.  A clock on the bombs says they have a minute and 29 seconds until it detonates.  Sherlock says he has no idea how to deactivate the bomb.  John and Sherlock realize they have no chance.  Sherlock begs John to forgive him before the bomb goes off.  John confesses that Sherlock is the “best and the worst man that he has ever known.”  Then he states, “I forgive you.”

Sherlock begins laughing hysterically.  After John Watson forgives him, he reaches down and turns the bomb off.  He knew how to detonate it the entire time.

The terrorist that left the train car bomb under the Parliament is preparing to leave his hotel, when he is bombarded with police officers.

Mary, Greg, Mrs. Hudson, Molly Hooper, and her fiancé Tom are gathered at Sherlock’s to celebrate solving the case.  Sherlock and Watson head outside to “tell the story.”  Sherlock is still concerned though, because he has no idea who tried to kill Watson, and who ordered the terrorist to bomb Parliament.  John wants Sherlock to tell him how he faked his death, but Sherlock refuses.

Sherlock heads outside to a mass of reporters, with his trusty sidekick Watson following behind him.