BY Joanna Mazewski on July 9, 2014 | Comments: one comment
Related : Reality TV, Recap, So You Think You Can Dance, Television 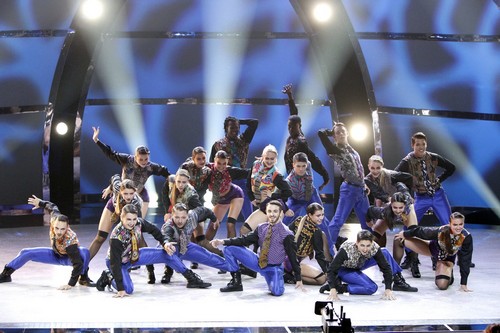 Tonight on FOX, SO YOU THINK YOU CAN DANCE continues with a new episode. On tonight’s episode the Top 20 dancers perform for a second time, but two contestants are eliminated.

On the last episode the Top 20 finalists – 10 guys and 10 girls – performed live for the first time and for America’s vote with partners in their own styles, so that the nation could get to know more about them and their talents. One of the best pairs last week was Carly and Rudy who performed a contemporary dance to “Take It Easy” by Jetta. Did you watch the last episode? If you missed it we have a full and detailed recap, right there for you.

On tonight’s episode, top 20 finalists perform for the nation again before learning which dancers will be ending their journeys. Tune in to see if your favorites make the cut and who is sent home.

A new episode of So You Think You Can Dance Season 11 airs tonight at 8PM and you don’t want to miss it. Celeb Dirty Laundry will be live blogging the show each week, so don’t forget to come back to this spot at 8PM EST for our live recap!

Tonight’s show opens with the top twenty performing a routine to New York, New York from the Broadway musical On the Town which will be opening this fall. It’s the last time that they’ll all be performing together onstage because two will be leaving tonight. After last week’s performances 6 dancers are ultimately in danger and are going to have to dance for their lives. Tonight Misty Copeland of ABT will be joining regular judges Nigel Lythgoe and Mary Murphy on the panel.

We’re not wasting any time as Kat Deeley hops right into the six dancers who are in the bottom after pulling the fewest votes last week. Brooklyn, Casey, Nick, Malene, Jourdan and Serge will be dancing for their lives later in the show. Tonight partners are pulled from the hat and Tanisha and Rudy are a new duo. They pull contemporary out of the hat as their dance style and get to work with Sonya Tayeh. As usual, it’s a gritty dance (which is what Sonya is best known for) and both Tanisha and Rudy sold it. All three judges loved it and believe that this brought out the strength in them.

Valerie and Ricky are dancing together this week and they are working with Travis Wall. The piece is about the guy that got away and Valerie had to learn quickly to keep up with Ricky because contemporary is his genre. I have to say I never expected her to keep up as a tapper, but boy was I wrong. They were amazing together and she proved that she can do a whole lot more than tap.

Bridget and Emilio have pulled hip hop out of the hat. She’s playing the hot girl and they had good chemistry. Nigel hated Emilio’s costuming and said he reminds him of a hobbit but he loved his dancing. Misty and Mary both were surprised by how well Bridget did and praised her for getting down into the music beside Emilio.

Contemporary dancer Jessica pulls Nick out of the hat and they are doing a West Coast Swing by season 2 winner Benji Schwimmer. It was a super fast routine and Mary pointed out that both of them struggled a bit. Misty tells Jessica to pay attention to her neck. Nigel actually says that he believes that Benji was mean to give this pair a dance this hard.

Carly and Serge are paired up this week and they are doing a Sonya Tayeh piece. It’s another painful relationship story and it’s just stunning. The concept is about not letting go and they killed it. Misty simply says “Wow.” Nigel was shocked by Serge’s ability to take on a contemporary piece and do it such justice.

Carly and Serge are paired up this week and they are doing a Sonya Tayeh piece. It’s another painful relationship story and it’s just stunning. The concept is about not letting go and they killed it. Misty simply says “Wow.” Nigel was shocked by Serge’s ability to take on a contemporary piece and do it such justice.

Emily and Teddy are going to give us a Dave Scott hip hop routine. He suggests they go and make out to get more comfortable with each other. It was a great routine to Ed Sheeran’s Don’t but they seemed to lack a bit of chemistry. Mary thought they were cute and Nigel thought it was fun. Misty thought Teddy was just awesome and Emily needed to get a bit more comfortable.

Malene and Stanley are dancing a Broadway piece inspired by the 60’s. They are also using telephones as props (and she has the best 60’s hair ever) and it looks like a tangled disaster begging to happen. Some how they got through it and did well. Mary wished that they had ditched the phones halfway through and just danced together. Misty thinks they are beautiful dancers but didn’t connect with each other. Nigel thinks the concept was good at first but by the end it did neither of them justice.

Jourdan and Marcquet have chosen a sexy jazz piece that is supposed to be an interrogation. They performed to Britney Spears Work Bitch and she was fierce. Misty thought that Marcquet was out of character but this was one of the sharper dances of the night. It was super aggressive and needed to be or else this would have been a mess.

Brooklyn and Casey pulled an Argentine Tango out of the hat. It’s about her controlling him and eye contact is vital. Their technique is really good and they are in control while remaining intense. Nigel thinks that they were tremendous and Mary admits that she had always thought Brooklyn is cute, until now. Now she is grown and just melted into Casey.

Jacque and Zack are the last couple of the evening to perform a fierce African Jazz piece by Sean Cheeseman. This was just beyond cool. Afro Jazz has to be totally perfect and then it’s just amazing and they killed it. Jacque is usually a delicate bunhead and she annihilated it right alongside Zack. Mary put them on the hot tamale train.

After all of the dancers performed together a dance crew called Syncopated Ladies took the stage and did a tap routine to Beyonce’s Flawless that was just amazing. It was cool to watch 10 women tapping together and they were pretty hot too. Leave it to SYTYCD to give us something different.

Now it’s time for the results. After watching all of the ladies perform again tonight the judges decided that Malene is leaving. Nigel tells her flat out that her looks got her further than her dancing in this competition! Now it’s time for Nigel to send one of the guys home. Serge and Casey are safe and it’s Nick who is leaving. Tune in next week for more of SYTYCD.