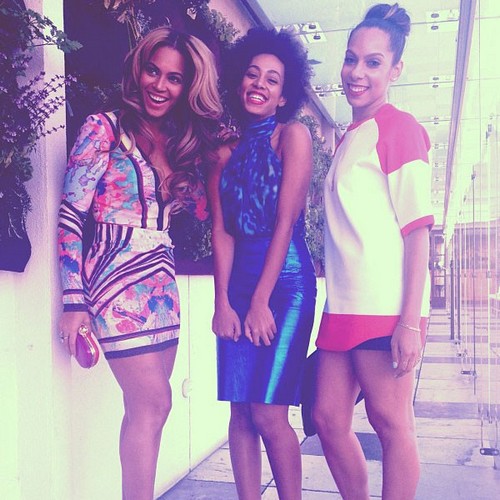 Things just keep getting messier and messier as we learn the details of the battle brewing between Beyonce and her sister Solange. We told you yesterday that CDL has learned that Jay-Z’s cheating is what led to the elevator smack down that Solange unleashed on him at The Standard in NYC after the Met Gala last week. Apparently somewhere along the way that evening Solange learned that her sister’s man had been disloyal yet again and she vented her anger as Beyonce stood to the side looking numb at best. That was her general demeanor of the entire evening as she navigated the Gala with empty, glassy eyes.

After security guards broke up the fight Beyonce and Solange left in a car together and then they spent a good chunk of the rest of the week together, jetting to Costa Rica for Kelly Rowland’s wedding to Tim Whitherspoon but once they returned home there was a chill. While Solange has recently been pegged as nutty and a drug using loose cannon, she seems to be a whole lot stronger than her sister. Apparently when they left the country Solange thought that this was the last time that Bey would allow Jay to disrespect her. She even tweeted on Sunday “This might have been top 10 days ever in life” which tells me that girlfriend is pretty happy to have gone crazy on Jay-Z.

Unfortunately it now looks like Bey is afraid to pull the plug on her marriage and may choose to stay with a cheater. According to a source close to the situation Solange is officially off the merry-go-round. She has gone back and deleted every post on her Twitter and Instagram accounts that is connected to Beyonce, with the exception of one photo. The message is loud and clear that Bey no longer exists if she doesn’t actually start carrying herself like the strong woman that her PR handlers sell her as.

Not that leaving would be easy. Beyonce and Jay-Z are a brand completely intertwined and they also just signed on to do a joint tour so it’s not as simple if packing a bag and flying to the next closest mansion. Breaking up the marriage would also mean breaking up business and that is complicated. Even if Bey is going to stay she’s clearly not happy. She and Jay were forced to make an appearance last night at the Brooklyn Nets game to give the impression of a united front but her face said that they are anything but. There are also rumors of Bey’s infidelities too so god only knows what else has gone on behind the scenes.

Was Solange smart to cut Bey out for now and to take a step to prove that she means business? Tell us your thoughts in the comments below!