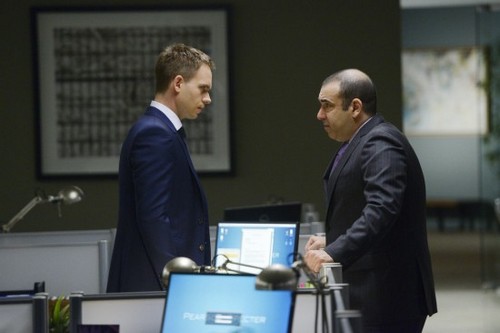 Tonight on the USA Network SUITS finally returns after a long hiatus with its Winter premiere called,“Yesterday’s Gone.”  On tonight’s show Jessica finds an unlikely friend in Harvey as her concerns continue to mount.   Did you watch the last episode before the hiatus? We did and we recapped it right here for you!

On last week’s show things got complicated when Harvey mixed business with pleasure and got caught between Jessica and Scottie. Painful memories plagued Mike as he used a case to exorcise demons against an old foe, while Louis’ suspicions threatened to expose Mike.

On tonight’s episode both Mike and Jessica lean on Harvey for support when things from their respective pasts throw them off their game.

Tonight’s season 3 episode 12 looks like it is going to be great and you won’t want to miss it, so be sure to tune in for our live coverage of USA Network’s “Suits” at 10:00 PM EST! While you wait for our recap hit the comments and let us know how excited you are for the season 3 episode 12 of Suits tonight.  Check out the sneak peek below of tonight’s episode.

Tonight on Suits: Jessica finds an unlikely friend in Harvey as her concerns continue to mount.

Tonight’s episode begins with Mike and Rachel talking about their plans for a new bed. They see Louis leaving the office and Rachel tries to pull away. Mike tells her they don’t have to hide their relationship anymore since it will come out soon anyway.

Harvey listens to Donna’s advice after arguing for a bit finally relenting on an idea for a gift for Scottie after hinting that Donna might be jealous. Louis catches Mike in the bathroom and shares the news that Professor Henry Gerrard will be there to give a lecture on Friday. When challenged to remember what grade he got in his class, Mike comes back with the fact that he has the professor’s book memorized. Louis tells Mike he never took the class. Mike comes back saying he had to because it is a required calls at Harvard. Louis pushes farther telling Mike he never went to Harvard. Although Mike reminds him of his transcripts, Louis tells him he knows he is lying. He will not come out with what he believes to be true just yet because he doesn’t want to make a mockery of his firm. He tells Mike that if the professor does not go up to Mike upon seeing him on Friday, Louis will have his proof as the professor would surely remember the only student he’s ever given an A+ to. Louis goes on to say that if the professor does not recognize Mike, he will launch an investigation and take him down. Mike looks like he ready to throw up!

Donna comes in to help Harvey and Mike come up with a plan to keep the professor away. Harvey goes in to see Jessica and she shares that Quentin has died. She shares that while she knew it was coming, it hasn’t made things easier. She and Harvey are co-executors of Quentin’s estate. Harvey offers to handle everything since he knows how Jessica feels about Quentin’s wife.

Rachel and Mike go to lunch and discuss what they can do to try to get Louis to believe Mike went to Harvard. Rachel inadvertently gives Mike an idea. While Harvey told him to hold tight, he is off to get started on his own plan.

Back at the office, Harvey and Jessica meet with Lisa about the estate and the meeting quickly erupts into an argument between Lisa and Jessica. Jessica is shocked that Lisa wants to sell Quentin’s company already. She recommends waiting until they can review everything. Lisa reminds her that she now owns the majority of the company and she wants to sell. It starts getting personal between the two ladies, when Jessica walks out. Harvey offers to step in and help by evaluating the offer himself and given an unbiased opinion. Jessica and Harvey argue over the sale again. Tensions are high from everyone on this. Lisa and Jessica have a nice long talk.They do later agree to the sale, on the condition they continue work on the drug Quentin created that will hopefully be the cure for ALS.

Mike goes to Louis’ house to plead his case. He comes up with a long story about always doing well in every course without studying, except for Professor Gerrard’s course. He tells him that he actually received an F for the course and tried to plead for another chance. When he didn’t get the opportunity to better his grade, he changed his transcript. Louis seems skeptical, but Mike assures him that he went to Harvard and the only lie was that he received an A+ for the course. After he pleads for mercy, Louis still condemns him for “cheating” and closes the door in his face. Rachel goes in to talk to Louis to ask him to drop the issue. Rachel focuses on how much the two enjoy practicing law and begs him not to take that away from Mike. Later, while Mike works late, Louis approaches him with an offer. He feels that Mike needs to make right for what he did…by apologizing to the professor. Louis says that if he doesn’t have the morals to do that, he has no choice but to get him out.

Harvey is upset with Mike for not waiting like he asked, and possibly making things worse. He tells him not to do anything until he gets back from Boston. Rachel is upset when Donna comes and comforts her, telling her not to worry because Harvey will take care of everything.

Harvey goes to see the professor. The two start off on the wrong foot. Even so, Harvey attempts to blackmail the professor who stands firm and tells him he is not cancelling his trip. Back at the office, Mike is visibly shaken and disappointed in his hero when he hears that he failed and doesn’t know how to fix the situation. While Mike tells him there has to be something they haven’t thought of yet, Harvey disagrees and says he does not know how to fix this one.

Harvey attempts to find Louis’ soft side and talks about friendship and encourages him to let his battle go. Harvey leaves Louis with some things to think about. It must have worked because when Professor Gerrard arrived, Louis played things off so that when Mike approached them, he was able to bow out of giving his apology to the professor. Mike tells Rachel and they leave early so they can celebrate.

Winding down with a couple drinks in the office after hours, Jessica and Harvey sit and reflect on the day. Jessica asks if Harvey took care of his “Marcus” problem. Harvey says yes at first, but then fesses up that there was not really a Marcus problem. Jessica, nodding her head and smiling said she already knew that. He asks if she wants to know the truth and Jessica, taking a sip of her drink replies, “not tonight.”