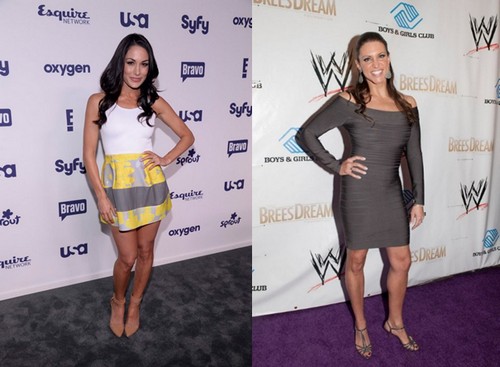 The WWE SummerSlam 2014 throwdown between Stephanie McMahon and Brie Bella has quickly become one of the hottest parts of the card and with good reason. Few wrestling personalities can work up hatred quite like Steph. With that said, it is unclear how the match will actually play out. The storyline is so hot that WWE would be wise to find some way to either extend it or spin off of it. SummerSlam is typically a PPV to settle scores for good but this would not be smart in this case. While Brie certainly will need to get her “revenge” on Stephanie, the feud needs to have a loophole of some kind.

Here are two potential ways for the WWE to get the most out of it:

Bring in Paige as a “Corporate Champion” type character – Stephanie clearly is not going to become a full time in ring performer at this point so the feud has to transfer in some way. Have Stephanie come in and have a huge fight, but only after helping Paige “cheat” to win the WWE Divas Championship. After screwing over AJ and making Paige champion, Paige can then be revealed as the authorities” Diva champ. This will get her much needed heat. Later in the show, Paige can return the favor for Stephanie by “saving” her. This shifts the feud back to the actual Divas with a Brie/Paige feud.

Turn Nikki Heel – This is the rumor most often being heard in WWE circles and it is a huge mistake in my opinion. Nikki has not been all that impressive in the ring and I do believe the Bellas need to stay apart for a bit. Since they were separated, both of them have seemed to do much better. The big problem for Nikki is that I think she would have a problem with sustained heel behavior. Brie and Nikki have been branded together for so long, having them face one another would probably be extremely boring. I would much rather see them facing off against others.

Although the WWE could certainly go a different direction, these two scenarios are the best options in my view. The Paige angle would make the most sense because it could capitalize on the heat that Paige needs while bringing Brie back into the Diva’s division as an in ring competitor. AJ has enough going for her to sustain any feud without the title but Paige needs it right now. Representing Stephanie could do a wonderful job of bringing her the attention she so sorely needs.