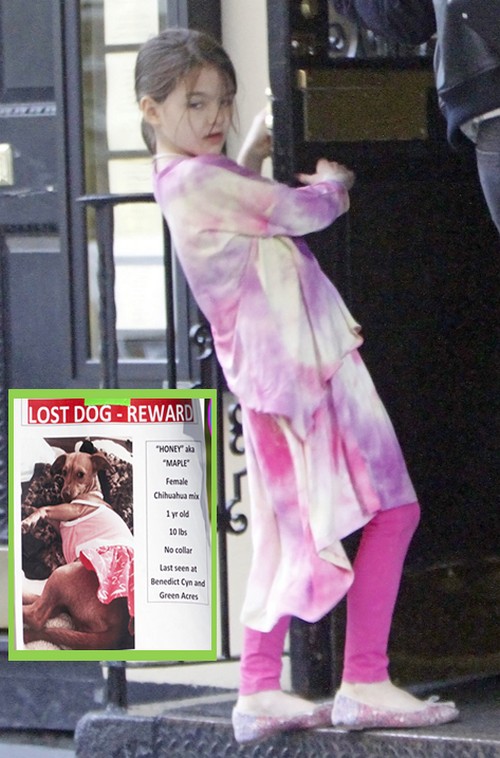 Suri Cruise’s new Chihuahua is missing. Suri and Katie Holmes (Mother-Maniac) took Honey (Chihuahua-Ohgawdgone) to a friend’s house in Beverly Hills on Sunday. Katie and The Friend (dum-de-dum!) were sipping on Mimosas when Honey escaped through the gate. The teeny-weeny pup disappeared like Bruce Jenner’s face. Katie screamed, Suri cried and The Friend ran into a wall. Where is Honey? Gone, gone, gone!

Suri and her dumb mom are offering a $1000 reward for Honey’s safe return. They issued a pet Amber alert and plastered 50 (seriously?) reward posters in the area. It’s a classic case of “find the collar, find the dog”- Oh, wait, Honey didn’t wear a collar because someone removed it to take the pup swimming. Cruel. Twist. Fate.

Suri – bless her heart – adopted Honey from a Studio City rescue a couple of weeks ago. The family of three then moved into their new house in Calabasas (Kardashian country), and Honey was as happy as a bee. Unfortunately Calabasas is a “known irresponsible hotspot”. Kim Kardashian failed her kitten, Kris Jenner took a pig to a party and Kendall Jenner dumped dog poop in the kitchen’s trash bin. Death becomes the Kardashians, except for Bruce Jenner. The man’s tight face lights up like Gary Busey’s brain when someone does something irresponsible e.g. Kim naming her kid after a compass.

When are they bringing in the psychics? Crystal ball on the wall, who is the dumbest of them all? “His name starts with a ‘B’. Brian? Brad? No, that’s not right. Bruce? Could it be Bruce?” Shut up and look for Honey!

Do you live in the area? Have you spotted Honey? Let us know your thoughts in the comments below.

Update: According to TMZ Honey was found! According to sources there is however some doubt as to whether the chihuahua that was ‘found’ was really Honey or a ringer. Perhaps guilty Katie arranged for a pup to be ‘discovered’ so Suri would feel better?