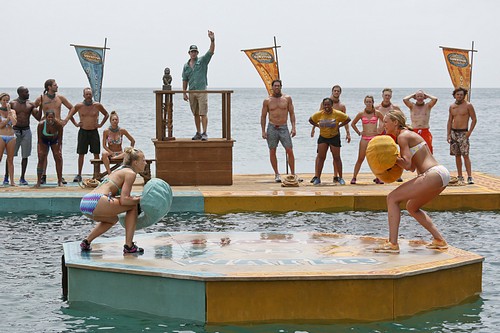 Here are the five people that I have tabbed as leaders thus far on Survivor San Juan Del Sur Blood vs Water:

John Rocker – You kind of knew this was going to be the case, but Rocker has surprised me a bit. I was a huge Braves fan during Rocker’s days with the club but it was in spite of his presence, not because of it. Rocker was a world class jerk back then and seems to have mellowed a bit on Survivor. That said, he might explode at any time and it appears that is going to be the case later in the season based on previews. Either way, Rocker has led by example thus far and kept his nose relatively clean in the process. He was a beast in the first obstacle challenge.

Jeremy Collins – This fireman certainly made a splash in episode one and he showed that he can take the reigns. Along with that, he showed that he has an ego the size of Mount Rushmore to match. If Jeremy wants to succeed, he is going to have to dial it back a bit. He sure seemed to embrace the females on the squad rather quickly and came across a bit like he thought he could control them. That could backfire big time.

Josh Canfield – As far as natural leadership, Josh came off as the best option. He seems to really have a level head and might be the silent assassin in the game. If he has the guts and the ability to stab people in the back and do so from that same quiet leadership position, he will be a monster Survivor candidate.

Baylor Wilson – Baylor is the strongest female thus far socially and she seems to be fully aware of where her bread will be buttered. She did not fall for the female alliance and instead sided with Josh. That was a smart move. The female alliance rarely works because there is always a weak link in the group that realizes it never works. Baylor was the smart one this time around and gave herself options. That could turn into leadership down the road.

Julie McGee – Julie, much like her husband, is a power packed individual with plenty of confidence. The problem with her is that she is too in your face about it thus far. If she plays her cards right, I can see her outlasting her husband. Julie could also be the next to go if she is not careful about how she uses her personality. Sometimes too much is…..too much.