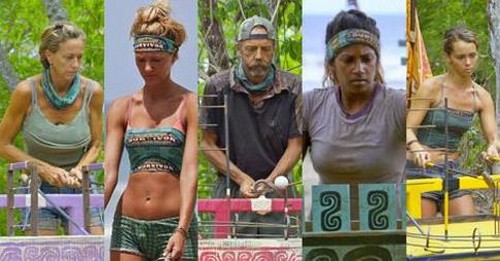 Who Won Survivor 2014 Blood vs Water San Juan del Sur Season 29 will be known soon and as the winner is revealed we will be recapping it live for you right here! Tonight on CBS their Emmy Award-winning series Survivor Blood vs Water San Juan del Sur airs with an all new Wednesday December 17, season 29 reunion episode, and we have your weekly recap below! Tonight, it is a live one hour reunion special hosted by Jeff Probst. We will also get to hear from the castaways that did not win. Earlier in the evening we saw the final episode and now we are going to find out who won the title of, “final survivor.”  You can read our LIVE recap of the finale elimination episode of Survivor Blood vs Water right here!

On the last episode, the final five castaways competed for a spot in the final tribal council where they were questioned by the jury. Did you watch the finale? If you missed it, we have a full and detailed recap right here for you.

On tonight’s episode as per the CBS synopsis, “The winner is revealed as the 18 castaways reunite to discuss their experiences.”

Tonight’s season 29 reunion episode looks like it’s going to be great and you won’t want to miss it, so be sure to tune in for our live coverage of CBS’s Who Won Survivor: San Juan del Sur – Blood vs Water at 10:00 PM EST! While you wait for our recap hit the comments and let us know how excited you are about season 29 of Survivor? Who do you think will win Survivor Blood vs. Water?

That’s all we see. Jeff goes and gets the votes. He tells everyone thanks for another fun season and says he’ll see them back in the US for the reading of the votes. Jeff walks out with the votes and then onto the live stage in LA. We see the finalists and the jury. Jeff says he loves this and says it’s time to finish the season. He says to end up with the final three of women when they started out with more men, it’s commendable.

We are back and on to the reunion part of the show. Natalie gets wild cheers from the crowd. Jeff says he got a lot of Twitter questions about Natalie. He asks if her sister being gone made her play harder. She agrees. Natalie says she blacked out when he asked for idols. She says she didn’t even remember asking Jaclyn if she voted the way they talked about. Jeff says he thinks her biggest move was getting Jaclyn to vote out Keith.

Jeff asks Jaclyn if she regrets voting out Keith. Jaclyn says she played her and says she didn’t know Nat had an idol and says she really thought Keith had all the jury votes. Jeff asks how they would vote if Natalie had been in the jury and it was Keith, Missy and Jaclyn. They raise hands and Keith gets four, Jaclyn gets three and Missy gets one. Keith would have won it but Jeff says it wasn’t as dramatic as he thought it would be.

Keith says if you don’t get to the end it doesn’t matter. He says at number 10 you feel pretty good and then they don’t vote you out and you feel great. Jeff says he’s very open with his emotions and says Keith cries as much as he does. Jeff mentions Keith telling the alliance “stick to the plan” which shows he doesn’t have a clue about playing Survivor. They come back and Ketih is teary again. Jeff asks if his firehouse buddies give him grief.

He says they all say “stick to the plan” to him all the time. He asks Natalie and Jeremy feel playing with Keith who has no clue how the game works. Jeremy says he and Josh go back and forth but you don’t know what Keith is going to do. He says it makes it harder to play with people who aren’t strategists because you can’t anticipate everything. Jeff has a Twitter question for Natalie about her and John Rocker. He asks why she exploded at Rocker and was it strategic.

Natalie says it wasn’t – she says she took out all her anger at Nadya getting voted off at John. Jeff asks if Rocker really initiated it and Natalie says he mentioned Nadya, but not in a bad way and she just blacked out and went off. John says he knew something like that would happen. He says he was watching his exit episode and was watching Natalie on Skype yelling at him. He says they’re all friends now. Jeff says he tried to bond with Jeremy and Josh – the black and gay guy.

Jeff says John is outspoken but seemed to have good intentions. He says a Twitter fan wanted to ask if facing Barry Bonds was harder or this game. John says he knows how to face Barry but says the strategy and unpredictability makes it difficult. He says it’s all wildcards and you can’t make a game plan. Jeff says Josh and Reed are up next and were two of the most popular players that are changing the world outside of the game.

Jeff says they had more people giving up rewards than all other seasons combined and we see a flashback to them. Jeff then talks about Reed and Josh being an openly gay Christian couple. Josh says they’ve had a huge reaction and it’s been 98% positive with people thanking them and young teenagers from the Midwest saying they are like them – gay and Christian. Reed says they get contacted by individuals telling their story.

Reed says one guy said his dad had ostracized him but then saw them on Survivor and said he really saw that gays could be Christian. Reed says it’s humbling. Jeff goes into the audience to talk to Charlene who says they showcased Christianity well and says – love is love. Jeff says the power couple Jon and Jaclyn also had people talking. He says a lot of people on Twitter were talking about Jon and Jaclyn’s big fight and taking sides on who started it.

We see the argument again and then Jeff asks Jon if they’re still together. He says they are engaged now. Jeff says the thing he heard most from guys was that was the same argument they have with their GFs how it started from nothing. Jon said watching it from home was hilarious. He says they must have been starved and under pressure and says they don’t argue over small things at home. Jaclyn says in that moment it was big but watching it was different.

Jaclyn says she hasn’t met a lot of his family and that argument and the show is their first impression of her. Jon asks if their argument had an impact. Jon says it’s hard to say if then and says they wanted to talk about the vote, but couldn’t. Jon says it very well could have changed things and that Natalie may have been voted out. Jon says he meant to talk to Jaclyn about Reed but never got to. Reed says little moments can change so many things. Reed says he was so frustrated and was trying to get Jaclyn to talk to Jon about him.

Jeff asks Missy what it’s like to be asked about her many marriages. Missy says she’s carried shame about her three marriage and divorces. She says Survivor was therapy for her and freed her of that shame. Jeff says that you can see he as a hopeless romantic. Baylor says their relationship didn’t change much until the very end but throughout it mirrored their relationship back home. He asks if they’re tighter or if it’s more of the same. She says more of the same. Jeff asks Missy about what Reed said to her at the final tribal.

Missy smiles up at him and says nothing then says there is a huge elephant in the room. She says she’s very positive usually but what he doesn’t know is that she has been a step-mom so it really hurt. She says it was the biggest stab in her back and she wasn’t ready for it. Jeff says this show is exhausting and the jury is usually frustrated and want to get their shots in. Jeff asks how he feels. Reed says he wanted to talk about her character in the game, not in life.

He says she seems wonderful in life but he was talking about how she played. Reed says he stands by what he said within the context of the game. The crowd applauds. Jeff says next season is a big change and is getting ready to start. Survivor has traveled the globe over the years and is evolving again. This next episode is white collar versus blue collar versus no collar. It’s called Worlds Apart. Jeff asks the crowd if they associate white collar.

A guy comes down and says he’s a lawyer. He then calls for blue collar and brings a guy down who is a general contractor in construction. He says he’s proud to be blue collar. Then he calls for no collars who are free spirits. One comes down and she’s all tattooed and says she’s a free spirit. She says she lives life as stress free as possible. Jeff says this is what the new season is about and it’s all about America. It starts February 25th with the premier followed by the premier of the Amazing Race.

Cool – we can get all of our great reality groove on with those two shows back to back. Now it’s time for Natalie to get her million dollar check. Jeff has Nat stand up and hands her an envelope. She hugs and thanks him. Jeff talks about how to be on the show for future seasons.