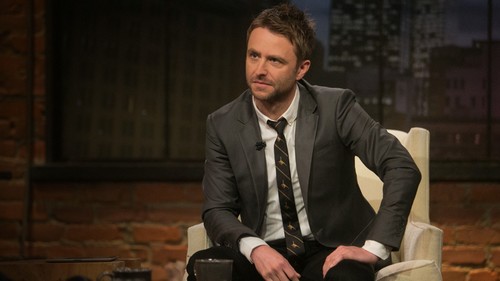 On the last episode of Talking Dead joining Chris were Mary Lynn Rajskub who is well known for her role as Chloe O’Brian on 24 and Slash who’s a well-known musician. There was also a surprise Walking Dead cast member stopping by. Tonight’s guests will discuss the evening’s proceedings and take your questions live. Did you watch the last episode? If you missed it, we have a full and detailed recap right here for you.

Talking Dead airs tonight, at 10 PM ET on AMC after The Walking Dead. While you wait for the recap, Celeb Dirty Laundry offers a live recap of tonight’s The Walking Dead Season 5 Episode 4 “Slabtown” right here!

Chris introduces his guests tonight Jon Barrowman Ana Gasteyer and Emily Kinny, Chris asks Emily how she feels to finally be back; she is so happy to be back in the show and that a bit of her story line is now out there so she can talk a bit about it. Chris asks if the opening was a homage to the first episode of the series, Emily confesses it kind of was. Chris asks John how he felt about it, John agrees it was very much like Rick’s first awakening in the shots.  Chris says that the people who come in demanding her to owe them, Ana says that throughout the entire series they have a bunch of intense moments like Atlanta being seen destroyed. John says he loves it though, to finally see how the world looks now since all they have seen was the woods for so long. Beth says she has always been in the forest and a farm for a lot; she hasn’t seen a lot of this destruction yet. Chris asks quickly if Emily was really kidnapped, because they did actually save her in a sense; Emily says it is like “save-napped” since they only wanted to use her to help around.

Chris asks what Beth means in this new world, Emily says that Beth holds on to the fact she needs a structure and understanding of how things go down. Chris says that everyone believes what they do is for the greater good. Ana thinks Dawn is far better than Gareth as a leader, since she didn’t eat people. Chris asks why Dawn needs to slap Beth in the face out of nowhere, Emily says it’s probably out of frustration she lets out an abusive side that she was hit several times. Jon says that Dawn is jealous of how Beth could be stronger than she thought and that others might pay more attention to her, she gets a little annoyed and takes it out on the others. Chris asks if there is any merit to how the hospital is being run, Ana says it’s pretty clean. Jon says that they are power hungry, yet it is a miniature of what the world really is how people force others to pay back and others don’t want to. Emily feels that Beth is a good leader, she has learned from Rick and Daryl.

A fan comes up from the audience named Adrian and he asks Emily what it was like to work with a whole new cast this episode, Emily says it was exciting yet she really missed all her old cast mates a lot; it was kind of hard to get to know a bunch of new people. Chris gives Adrian a lollipop, Chris mentions that when she was in the cafeteria he knew Gorman was surely going to die; Chris asks if Beth might have been leading Dawn to death in the office. Emily mentions that it was fast thinking, hoping that the walker might get her as well. A fan calls in and asks Emily what was going through Beth’s mind when they were sawing off Joan’s arm, Emily mentions she probably though of her father and how he had his leg cut off. Ana mentions that Beth is slowly becoming a badass after her Daryl training, she is stronger now but is still emotional at times.

A fan asked if Beth and Daryl’s relationship is more romantic or family like, Emily says that they don’t know themselves for sure yet; they didn’t have the time to really figure it out.

Chris asks Emily if Beth would be bummed if Maggie didn’t set out to look for her, Emily says that she believes that Maggie is very focused on what she has to do now because she hasn’t had time to really think about anything else. Jon mentions he never trusted the doctor from the beginning, he didn’t believe he could be trusted from when he first saw him. Emily mentions that she doesn’t really trust anyone anymore, it’s as if she’s just against everyone and wants to just leave; she is more focused on leaving. Chris mentions how Dawn comes into there room he though Beth would kill Dawn, Emily says at the end of the episode she was ready to kill someone because she has no feeling for anyone in the hospital.

Chris asks Emily how the decent into the elevator was like, she says it was crazy but fun yet also very painful and uncomfortable. Chris asks when Noah got away, there was a smile on Beth’s face; Emily says she was happy that Noah escaped yet also they have no power over her anymore. Chris asks whether Carol let herself get caught or not at the end.

Chris hopes Carol did it on purpose and will go all badass in the hospital and asks how Emily thinks Beth feels seeing Carol; Emily says it’s a game chance and she can’t just go with the scissors now. Chris announces everyone in the audience gets a free the Walking Dead guitar as well.

We get a look at the sneak peak of next weeks episode, we see Abraham beating someone in the face with a can and then stepping on his throat.

Jon says that in some how on the journey to D.C. someone was taken away from them, but it’s pretty vague since it’s someone jsut being killed by a can of soup. Chris asks if Beth really needs help in the hospital, Jon says that Daryl will come save the day and kill them all.