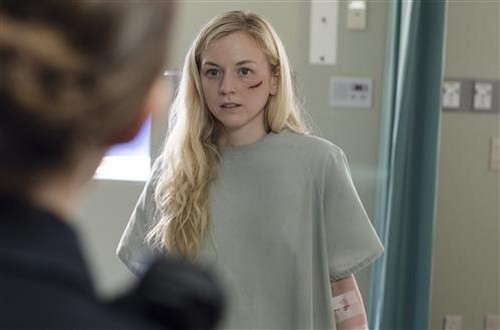 The Walking Dead returns on AMC tonight with all its gory goodness with an all new Sunday November 2, Season 5 episode 4 called “Slabtown”. Tonight, a group of other survivors are encountered.

On the last episode, Rick and the others found themselves pitted against a group of nasty people from Terminus who ate Bob’s leg. The group found Bob dumped outside the church where they were holding up, he reveals to the group that he was bitten and is infected. Did you watch the last episode? We did and we recapped it right here for you.

On tonight’s episode, things appear safe and nice, but there is a bit of a dark side for another group of survivors.

You aren’t going to want to miss any of the unfolding action tonight. We’ll be recapping the season 5 episode 4 live right here for you at 9pm. In the meantime, hit up the comments and tell us what you’re expecting from Season 5.

Beth wakes up in a hospital, she gets up off the bed and looks out the window not realizing where she is; she freaks out knocking on the door but nothing happens. A police officer and doctor walk in and tell her to drop the blade, Doctor Steven and Officer Dawn talk about how she was found hurt being attacked by  walkers. Beth then asks if they other man she was with is there, Dawn says she was found alone and she owes them now.

Steven brings Beth to an old man who is injured and found under a bridge dehydrated; he goes and pulls the plug because he hasn’t shown any improvement. Beth walks the body out with Steven; Steven stops to talk to Dawn. Beth sees a janitor at the end of the hall and looks down it, she then sees another room and walks over to take a look inside. She sees a woman but she shuts the door on Beth; Beth follows Steven further. Steven takes off the blanket on the corpse and unstraps it from the bed, he then dumps it down the elevator shoot.

A guy tells Beth she looks better now when she is getting breakfast, the officer known as Gordon mentions saving her and then tells her to show some appreciation towards him. Beth brings some food to Steven in his office, he mentions being very bored without any research. Beth tells him he’s lucky he’s safe enough to be bored, Beth tells him she hasn’t heard any music at all in a long time. Steven thanks her for the food and asks her why she has none, Beth says the more she takes the more she owes so she didn’t want any. Steven tells her to sit down and have some of his meal, Dawn comes in and they have a new patient. He fell from an apartment building, Steven says he’s a loser but Dawn wants him to try and help him. Steven tells her they have very little resources right now, Dawn goes ahead and smacks Beth in the face.

Beth is brought back to her room and Steven tells her that Dawn is just always in a bad mood; Beth looks in her pocket and finds a lollipop. Two officers bring a girl to Dawn and it’s a woman with her arm bitten, Steven goes ahead to give the girl an anesthetic and are going to cut off her arm, Beth says she can’t help with this; Steven tells her to come in and hold her down for him. Steven is cutting off her arm and Beth can’t help but look as Steven cuts it right off. Beth enters the cleaning room and a man named Noah asks if she is okay. Beth says she’s fine and he hands her new clothes, Noah shows his giant scar on his leg and tells her that they help people hoping for them to return the favor and make them pay it back. Noah says they think he’s weak, but they don’t know anything about him or how dangerous he can be; the same goes for her too.

Dawn comes in and brings Beth some breakfast, Beth mentions she doesn’t want any; Dawn tells her that she is offering her food and protection. Beth says she didn’t ask for her help at all, Dawn tells Beth to look at the good and that they save the lives of people. Dawn believes there are others trying to fix this world and they must all work hard to do so together and Dawn tells her she can work off as much as she can to pay it off then leave; so she must eat to keep strong. Dawn tells Beth she didn’t ask for this either, Beth goes ahead and eats so Dawn decides to leave. Beth is humming a song while mopping up blood of the floor, the girl who had her arm cut off tells her to stay for a bit. Beth says she is so sorry, she says that Dawn is a coward.

Beth is washing her hands but then goes to look under the mattress in her room. Gordon comes in asking if she lost something, he has the lollipop on him and puts it in his mouth. Beth says she doesn’t want it any more, Gordon puts it in her mouth after but then Steven walks in and tells her to leave her alone. Steven tells him he will stop him from what he’s doing, he lets Gordon know whenever he gets sick, bit or an infection then he’s going to be in trouble. Dawn walks in and tells him to back off, Beth asks Steven why he even bothers staying. Steven brings Beth to the ground floor of the hospital, he goes ahead and hits the bars on the door and there are several walkers out there. Steven tells Beth he stays here because of all the walkers are out there, he tells her to follow him and he’ll tell her a story. Steven takes her to the roof and tells her about a guy named Hanson who Dawn used to take orders.

They heard jets and bombs fly over, he was in the third floor and Seven says all was going well till the food ran out. They’d go out on runs and try to help people, he found a kid who had burns on his clothes and skin. Dawn made the kid compensate for his services, though Steven says the big problem was getting people killed sometimes and Dawn took care of all the things. Steven says no matter how bad it gets up here, it will only be worse down there. Beth starts crushing up pills and adding water, taking it up in a syringe and then injecting it into a patient. Noah comes in and the man starts having an attack in the hospital bed; Dawn stabs him in the head. Dawn asks what happened to him, Noah says that it was a problem he caused on his own when Beth left; he is taken to the office. Beth made the mistake and accidentally had the man killed, Dawn comes back into the room and asks her if she didn’t know.

Dawn says it was smart and she didn’t want to punish Noah, but she had to do it. Dawn says it’s all for the greater good and Dawn says when they are rescued then they will be part of the new world and put it back together. Dawn says that out there Beth is nothing but dead or a burden, Beth says it’s bullshit. Dawn sees the scar on her wrist and asks if she is really strong because of that. Noah has has bruises all over his face and cuts, he says it’s okay but they are all trapped here. Beth tells Noah that she will escape with him, she doesn’t want to stay anymore. Noah says he can keep an eye on Dawn while Beth gets the keys. Beth enters the office and goes to look inside the cabinets and finds a wallet wit ha card inside of it, Dawn then sees a pool of blood on the floor of the girl with one arm dead. Beth finds a key and Gordon walks in, he says hello and walks in hoping he isn’t interrupting; Beth says Dawn was asking for the key and is going to her. Gordon says he doesn’t remember that and it’s okay, she doesn’t have to know because there might be a another solution. Gordon starts kissing Beth’s neck and all of a sudden the armless girl comes back as a walker on the floor, and bites Gordon in the neck.

Beth is walking down the hall and has some blood on her shoes, she walks on over and Dawn asks her if everything is okay; Beth says that Gordon was looking for her and they are in her office. Beth is walking away and Noah comes with her, Beth looks down the elevator shoot and sees the walkers; Noah ties something around her waist and lets her climb down first. He almost lets it go and then holds on tighter, she is being let down slowly and slowly tills she reached the top of the elevator. Now Noah is going to climbs down, he is trying his best but is having a bit of trouble holding himself p, a walker grabs him from one of the elevator shoots and he hits the bottom of the elevator. The two get up and are trying their best to get out, Beth leads the way with her flash light, A walker grabs Noah again as they are walking out and Beth shoots it in the head along with a bunch of other walkers. Noah and Beth finally get out of the hospital together, Beth runs forwards but Noah is behind limping; many walkers notice the two and start walking over. Beth leads Noah over to the side of a fence with a hole, she then curb stomps a walkers head to mush. Beth is now shooting at the walkers coming closer, and Noah runs off without her as she gets jumped though the walkers are being shot dead by Dawn and the others. Noah basically runs off on his own as Beth is captured.

Dawn asks Beth who the hell she thinks she is, Beth says that Gordon attacked her and that Dawn is letting this crap happen. Beth says no one is coming for them and they will die; she is doing everything for absolutely nothing. Dawn hits Beth right in the face and she has another scar on her head. Beth tells Steven she knows he had her kill the patient who was a doctor, Steven says he would have been kicked out or something worse as in killing him. Beth just sits there in the chair, she then takes a pair of small scissors and hides it behind her back, she sees them bring in Carol on a stretcher though.