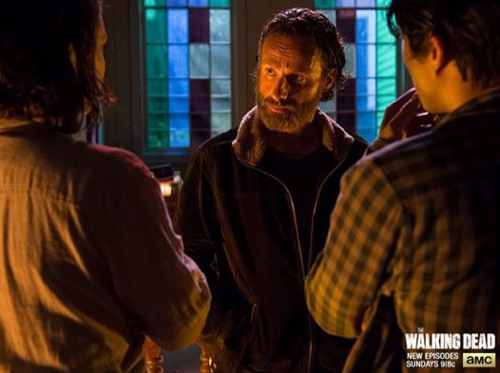 The Walking Dead returns on AMC tonight with all its gory goodness with an all new Sunday October 26, Season 5 episode 3 called “Four Walls and a Roof”. Tonight, Rick [Andrew Lincoln] and the group find themselves pitted against some nasty people.

On the last episode, Rick lead a risky mission for a possible small reward when the supplies ran low. The group heard a guy screaming for help, they all run after him and he was trying to kick the walkers off from getting to him on a rock. The group came in and killed all the walkers. The man thanked him and introduced himself as Gabriel, he was a priest and believed God sent him the help he called for. Gabriel asked if they had any food, he lost everything he had left; Carl offered him something to eat and Gabriel thanked him. Rick asked Gabriel why he hadn’t killed anyone, he said it was because the Lord did not like violence. Did you watch the last finale episode? We did and we recapped it right here for you.

On tonight’s episode, Rick and the others find themselves pitted against a group of nasty people.

You aren’t going to want to miss any of the unfolding action tonight. We’ll be recapping the season 5 episode 3 live right here for you at 9pm. In the meantime, hit up the comments and tell us what you’re expecting from Season 5.

We see the people of Terminus eating Bob’s leg, they see a bunch of walkers outside the window and Gareth likes looking at them; though the window will break with all of them pushing against it. Gareth tells Bob it wasn’t a trap but a choice to join or feed them, he tells him that bears when they start to starve eat their young; though decided that they needed someone since Carol got away. Gareth mentions pretty girls like Sasha taste better too, Bob starts to cry as Gareth mentions he’s going to get all of them. Bob starts to laugh at Gareth calling him an idiot, he was bitten and now all of the Terminus people are infected; now the group is freaking out like crazy. Bob starts shouting he is tainted meat and Fareth knocks him out with a kick to the face, Sasha is out in the woods looking for him and notices a mark on the tree. She looks through her scope and a walker comes out at her, she knocks it into the tree and shoots oe in the face; Tyreese and Rick come out and saves her.

They make it back ot the church and Sasha tells Gabriel to stop; he says he has nothing to do with this. Sasha asks where their people are, Gabriel says he doesn’t know. Rick asks why he brought htem her and if he is working with anyone, Gabriel says he has always been alone; Rick asks Gabriel what he’ll burn for and what he did. Gabriel mentions he locks the doors all the time at night, many people came scratching at his church door to get in but let the dead get them; women and children arrived. He falls down crying because of what he’s done, outside laying in the grass is Bob without his leg; they kill some walkers and bring him in.

Bob mentions that Gareth and five people are at a school, they ate his leg right in front of him like it was nothing and mentions Daryl and Carol driving off. Bob tells them to save their medical supplies because he’s already bitten, Gabriel offers them the sofa in his office to lay Bob on. Gabriel tells Rick he knows exactly where that school is, he tells Rick exactly where to go and Graham tells them they must all leave right now; Rick says they are going nowhere without Carol and Daryl. Abraham says they are leaving right now, Rick tells him they are not going without their people.

Glenn gets in between them and tells them to stop, Glenn tells Abraham they should go. Eugene tells Abraham he doesn’t want to leave, though he’s being forced to. Rick tells him again that he is not taking the bus, Abraham tells him to try and stop him; Rick walks over and Glenn gets in the middle again. Glenn tells Abraham to stay and help them, Abraham decides they have 12 hours then they will leave. Sasha asks why Bob didn’t say anything about it, he says he knew she’d just worry about the end; but he was really enjoying their time together.

Tyreese says that she can’t throw away the time she had with him, he really wishes he could have with Karen; Sasha says if he remembered how it felt. Tyreese says that forgiveness is facing it, Sasha says he’s messed up to go ahead and forgive them for what they did; Sahsa takes out a knife and tells Tyrees to take care of Bob if he stops breathing. Rick and the gang leave the church to go out to find Gareth, Gareth and the gang come over to the church instead; one of the guys break the lock to get inside. Gabriel sits back in the church, Gareth comes in saying they know that they are prepared for them. Carl has a gun held up aimed for the door, Gareth knows they can take out the locks with no problem at all. Judith starts crying and Gareth now knows where they are hiding.

Rick shoots two men in the head and tells them to put their guns down; Gareth tries talking but Rick shoots him in the hand and tells them all ot drop their weapons and kneel. Gareth says they use to help people, he wants to walk away and promises they will neve rsee each other again. Rick says that he already made him a promise; Rick chops him up and the others kill Gareth’s friends. Michonne finds her beloved katana on one of the people, Rick lets them all know that this could have been their fate as well.

The group is now saying goodbye to Bob, they all leave the room and he wants to talk to Rick; Bob thanks Rick for the fact the before the prison he had no idea if any good people were left. Though he took him in because that’s what he did, though says that he shouldn’t change how he is right now. Rick thanks him, Rick holds his hand. Bob is holding Sasha’s hand and can’t believe that he was out for so long, he’s smiling and Sasha asks why. He thought he could see her smiling back at him in the dream, Bob sadly passes and Sasha starts to cry. She pulls out her knife and Tyreese walks in, he tells her to give it to him now; Sasha hands it over and leaves the room. Tyreese walks over to Bob and stabs him right in the head.

Sasha builds a grave out back for Bob, Abraham hands Rick a route to which they will be taking to D.C. he lets them know that they should be there for it. Abraham and his crew get on the bus to leave, Glenn and Maggie even join them. Rick then walks over to see Tyreese digging graves, he decides to pick up a shovel and join the digging. Michonne is out by herself looking at her katana, Gabriel comes out and mentions he can’t sleep. He tells her it isn’t what happened last night, but before that he hears those who screamed to get in; Michonne tells him it won’t stop but it won’t be all the time. Gabriel goes back inside, but Michonne pulls out her sword and walks into the forest to find Daryl – But Daryl comes walking out alone.