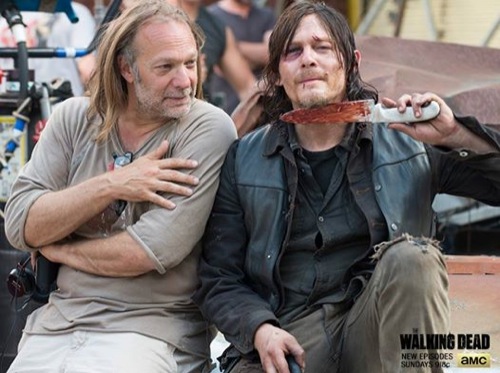 The Walking Dead returns on AMC tonight with all its gory goodness with an all new Sunday October 19, Season 5 episode 2 called “Strangers”. Tonight, with supplies running low, Rick [Andrew Lincoln] leads a mission where the risk might not be worth the reward.

On the last episode, in flashbacks, the Terminus inhabitants are assaulted and captured by marauders before their leader Gareth declares their need to become “the butcher”. In the present, Carol and Tyreese learn from a Terminus ally, Martin, that the rest of her group was being held captive in Terminus. Carol heads off to rescue Rick’s group while Tyreese stays behind, although he is forced to kill Martin when he threatens Judith’s life. Carol causes an explosion that sets fire to parts of Terminus, attracts a nearby herd of walkers, and averts the executions of Rick, Daryl, Glenn and Bob, who use the opportunity to escape after realizing that the inhabitants of Terminus are cannibals. The four fight their way through the herd of walkers and the Terminus inhabitants, and rescue the rest of their group, while Gareth leads some of his surviving men out of Terminus. After Rick’s proposal to pursue Gareth’s men is rejected, the group reunites with Carol, Tyreese and Judith, and proceeds to places unknown, with Abraham intending to deliver Eugene to Washington to cure the walker virus. Rick covers up a Terminus sign and labels it: “No Sanctuary”, which is discovered by Morgan Jones. Did you watch the last finale episode? We did and we recapped it right here for you.

On tonight’s episode, Rick leads a risky mission for a possible small reward when the supplies run low.

You aren’t going to want to miss any of the unfolding action tonight. We’ll be recapping the season 5 episode 2 live right here for you at 9pm. In the meantime, hit up the comments and tell us what you’re expecting from Season 5.

Maggie stops Glenn for a quick kiss, Rick then looks at Tara and tells her he knew she didn’t want to be there; he doesn’t hold what happened against her. Tyreese tells Carol to tell everyone else what happened at the prison, they all have to know what she has done and will have to learn to accept it as he did; though makes it clear they can’t mention the girls. Tyreese really wants to forget it. Michonne sees a walker and hits it with her machine gun, smashing its skull in. Rick tells Carol he owes her everything, Carol pulls out a watch she found at Termnius; Rick mentions seeing them kill a kid. Rick tells Carol that he sent her away and is sorry, though Carol said she didn’t because she survived; Rick asks if Carol will allow them to join her. Carol nods and smiles; Rick thanks her. Carol tells Daryl that she can’t talk about it, she needs to forget. Daryl hears something and gets up to go check what made the sound, he believes it’s nothing; though we see a shadow in the dark.

The group is moving through the woods, Daryl tells Rick that someone was surely watching them last night; though he can’t find any tracks around them. They keep walking, Bob and Sasha play good out of the bad. The group hears a guy screaming for help, they all run after him and he’s trying to kick the walkers off from getting to him on a rock. The group come in and kill all the walkers. The man thanks him and introduces himself as Gabriel, he is a priest and belives God sent him the help he called for. Gabriel asks if they have any food, he lost everything he has left; Carl offers him something to eat and Gabriel thanks him. Rick asks Gabriel why he hasn’t killed anyone, he says it’s because the Lord does not like violence; Rick asks what he has done. Gabriel mentions that he sins every day, though he confesses them to God; not strangers. Gabriel joins them, Rick asks him if he watched them in the night; he says he doesn’t like being near others and keeps to himself.

Gabriel leads them to his church, but they ask if they can look around before they walk in with him; they all go in with their guns up. Carol finds a book with bible passages written inside of them, Rick sees a ton of can sitting at the back of the church and tons of drawings on the walls. They all want to take a break at the church, finding ammunition and food; Abraham wants to leave though Gelnn tells him that they all will follow Rick’s lead. RIck asks Gabriel how he lasted so long by himself, Gabriel says that everything went bad when they had their annual canned food drive. Gabriel mentions that there are tons of walkers near the stores for supplies, Rick tells Gabriel that he must go out with them because he doesn’t trust him, Carl tells Rick that not everybody can be bad; Rick says that he’s got to bring him with him. So he wants Carl to protect the people at the church, in case Gabriel does have friends; Rick tells Carl that he is not safe no matter how much it may seem.

Rick, Michonne, Bob, Sasha and Gabriel are walking around the abandoned city. Bob asks Rick if they’ll be willing to go to Washington with Abraham and the others, Rick says he has not decided yet; Bob knows that Washington is surely going to happen. Carol and Daryl are walking back with water, Daryl wonders if Carol is okay; Carol says she has to be. Daryl says they have to start over with each other, though Carol says they got lucky; Carol then sees a car and goes to check it. Carol opens the trunk, Daryl walks over and says whatever happened is nothing so they should just start over, Carol says she wants to.

Maggie and Tara are outside a gun store, Glenn was inside and tripped though found some silencers inside a fridge; knowing that you can expect to find anything anywhere. Gabiel brings the group to a food bank, Rick walks in with his gun up looking around for any people or walkers; they hear a sound. Rick walks over slowly to find walkers in the basement through a hole in the floor. Rick tells Gabriel to follow them, though he doesn’t look so comfortable with it all.

The group is now in the basement filled with water, they are trying to block the walkers off and stab them in the head; using the shelves as a barricade. Gabriel notices that one of them is someone he knows, Gabriel tries to run back upstairs but the staircase breaks; he is terrified. Rick goes over to save Gabriel, one walker grabs Michonne; they kill the walkers and Rick goes over to Gabriel. Bob is grabbed into the water and a walker is on him trying to get a bite; though Sasha saves him by samshing its head in. Gabriel says sorry to Rick when he came out, Rick asks if he knew the walker alive; Rick gets it and tells him to go ahead and say it to God. Rick asks if Michonne misses her sword, she confesses that she only found it and got good at it when all she did was kill walkers alone. Michonne says she misses Andrea and Hershel; she doesn’t miss her sword though. Rick comes back and goes to find Carl out back; Carl finds knives scratched on the windows and leads Rick somewhere else. Rick notices writing on his church saying “You’ll Burn For This”.

The whole group is now eating and having a pretty good time, Abraham proposes a toast calling everyone a survivior; though asks if that is all they want to be. He says they can do that if they really like it or is this all there is to life or do they want to follow Eugene to Washington to get rid of the walkers. Eugene says there is lots of food, fuel and weapons they could get their hands on. Abraham says they’ll all be safe there and asks if they’d all go to save the world for Judith, themselves and the people out there surviving like them. Rick says Judith is in and decides they’ll go to Washington. Maggie sits down with Tara; Tara mentions being there with the Governor and confesses to no knowing what was going on at the time. Maggie gives Tara hug. Rick sits with Gabriel and thanks him for their hospitality, Rick thanks him for the wine and Gabriel says there is no one to have comunion so it’s just wine now. Rick tells Gabriel he knows there is something to hide and tells him that these people are his family; if what he is hiding hurts his people then he will kill Gabriel, Carol is out at the car now in the dark. She stabs a walker in the head, though Daryl comes out of the forrest and asks what she is doing. Carol and Daryl see a car speed by them, Daryl sees it’s a car with a cross on the back, he wuns and smashes the lights on the car and tells Carol to get in and follow since it’s the people who have Beth. Bob is standing outside by himself looking at the church, he walks off deeper and deepr to a tree and cries. A man hits Bob and knocks him out.

We see Bob wake up with a group of peopl around a fire; it’s Gareth who captured him and tells him he is not dead yet. Gareth explains that they didn’t want to hurt him before or pull him away from his group or scare them; these are things they have to do since his people took their home away. Now they are outside like everyone else trying to survive, though they have to hunt to do that; they didn’t start off eating people but they evolved into doing that. THough they have devolved into hunter, he tells Bob that they can’t go back; he hopes that nothing happening to Bob is personal. Bob is missing his left leg and Gareth eats piece of it right in front of his face; he also mentions that Bob tastes much better then they thought he would.