Did Taylor Swift Bug Meryl Streep? – Taylor Struggles to Perform on the Set of “The Giver” – Report 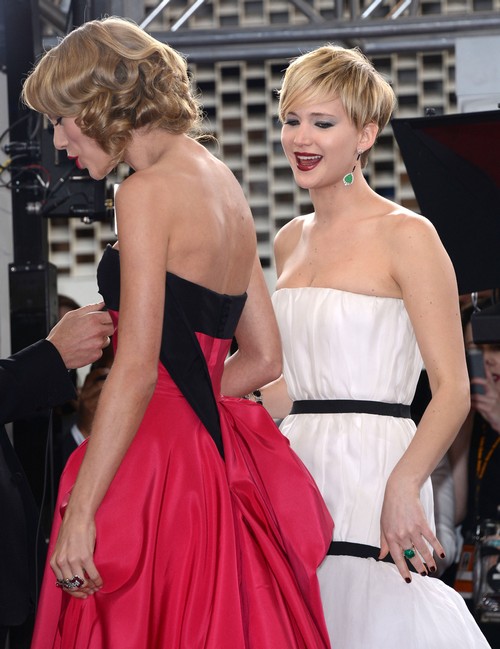 Since Taylor Swift has all but conquered the music charts I guess it’s not too surprising that she would want to challenge herself in other ways, right? She signed on to do a sci-fi flick called The Giver, that stars Hollywood heavyweights, Meryl Streep and Jeff Bridges. Not bad for a first film, but it is reported that Taylor is barely surviving life on set. According to the Jan. 20th print edition of GLOBE Magazine sources say that Taylor is absolutely terrible. She’s stiff, can’t relax and let herself fall into character and keeps recycling the same facial expressions while filming.

If that wasn’t bad enough, GLOBE’s Shelby Loosch reports that girlfriend has been trotting after Meryl like a puppy dog behind the scenes. Sources say that it got so bad that Meryl actually had the producers pull Taylor aside and ask her to back off. They apparently explained to Taylor about personal space before suggesting that she just wait in her trailer until she is needed on set.

Obviously, this is a totally new environment for Taylor and she’s learning as she goes along so no one can blame her for making mistakes. But do you think that Taylor is going to walk away feeling like the experience was a bit rocky or will she consider herself to be a good actress that can now conquer films too? Should she just focus on her music or do you think that with a bit of time and experience acting will also be a regular thing for Taylor? Tell us your thoughts in the comments below!

UPDATE: Taylor’s Rep told CDL exclusively that in fact Taylor and Meryl have had no on-set interaction filming The Giver and were not in South Africa at the same time.