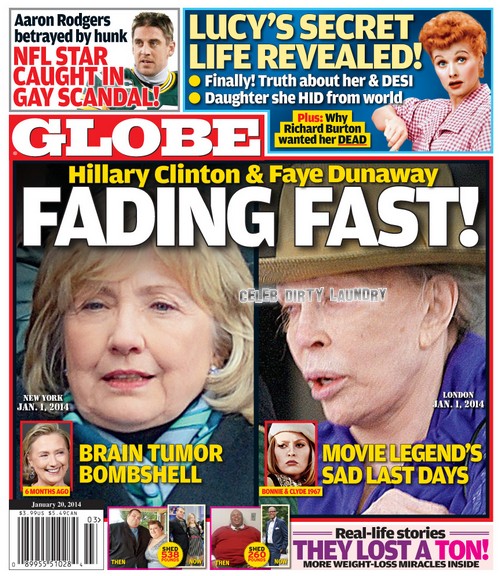 I think every single week I mention how GLOBE Magazine is the only publication that consistently dips into the Hollywood chronicles that matter, don’t I? Well guess what – they’ve done it again. Lucille Ball is probably one of the most beloved comedic actresses ever and of course she, like everyone else, had some serious secrets. The Jan. 20th print edition of GLOBE delves into the truth about her long running relationship with Desi Arnez and the daughter that she kept hidden from the public eye. It seems like there is always a lot more to these stories than at first glance and GLOBE gets to the bottom of it.

Also in the latest issue there is a story about Faye Dunaway’s health deteriorating. The Hollywood heavyweight was spotted leaving a New Year’s party in London looking beyond bad. Granted she is 73 but there have been rumblings about the actresses’ overall health for awhile now and these latest photos won’t help quiet the talk. Hillary Clinton is also rumored to be battling some serious health problems. According to sources close to the possible 2016 presidential candidate she may have to fight through a brain tumor and come out the other side of it before we will see her prominently in the public eye again.

It seems like there is always a gay sports scandal brewing doesn’t it? This time around NFL player Aaron Rodgers finds himself smack in the middle of the drama as he is tangled in allegations of risky behavior.GLOBE delves into the hidden story behind the allegations.

You’re going to want to grab the Jan. 20th print edition of GLOBE Magazine for another exciting week of reading. Leave it to GLOBE to discover the facts that elude  other news magazines – when I want to learn the real story behind the story that everyone else is telling I turn to GLOBE.