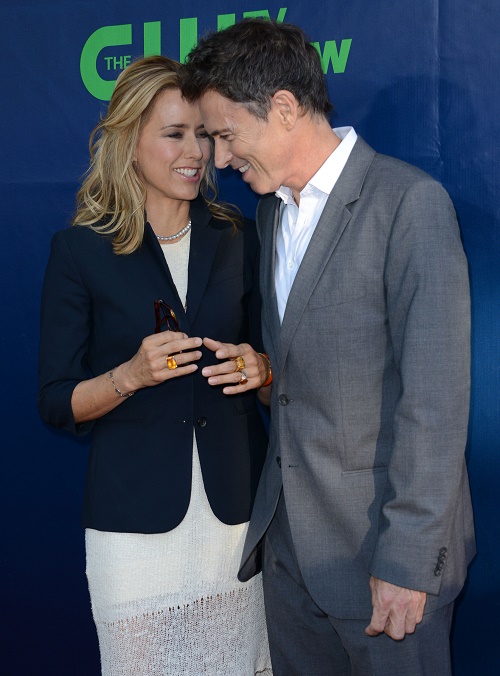 Just a few months ago, there were rumors that Tea Leoni was back together with her ex-husband, David Duchovny. These rumors claimed that Tea and David were reconciling for the sake of their children, and that they were just weeks away from getting back together for good. However, we never bought that they were back in a relationship, especially since David Duchovny was reportedly dating Gillian Anderson by then. And we all know how long fans had been waiting for that relationship to happen…

Anyway, US Weekly has a new report confirming that Tea Leoni is actually dating her Madame Secretary co-star Tim Daly. The two play a married couple on the show, and so it makes sense that real feelings would spill over into their off-set life.

Now, immediately after this news came out, several outlets have already tried to claim that David Duchovny is jealous and bitter that he’s lost his chance at winning Tea back. However, we can categorically confirm that this is NOT true, and that David Duchovny really couldn’t care less what Tea Leoni did with her free time. Again, this is because David is finally dating the love of his life, Gillian Anderson. Ok, to be fair, we don’t actually KNOW that David is dating Gillian, just that the evidence overwhelmingly points to that.

What do you guys think? Will Tea Leoni and Tim Daly make their relationship work, and if they don’t, will the show end up suffering? And do you think David Duchovny cares about Tea’s new romance? He’s got Gillian Anderson, and the two are supposedly happier than ever. And if that’s the case, you could also argue that it was David who stopped any reconciliation with Tea from happening, all because he was in love with Gillian. Right? RIGHT?