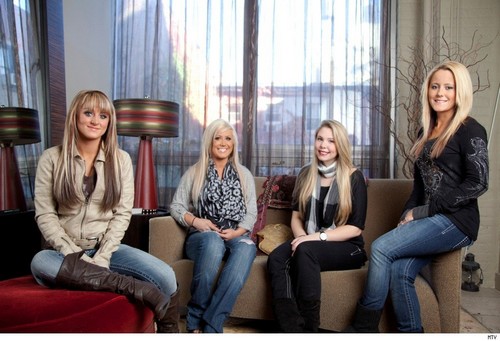 Tonight on MTV the new season of TEEN MOM 2 returns with a whole new episode, “Love Will Never Do Without You.”  On tonight’s episode Jenelle meets a new guy; Chelsea starts beauty school; and Leah goes on vacation.  Did you watch last week’s episode?  We did and we recapped it right here for you.

On last week’s premiere episode Jenelle makes the decision to abort her pregnancy. Kailyn had her baby shower. Leah had a difficult time coping with Ali’s latest diagnosis. Chelsea received word that Adam was the father of another child.

On tonight’s episode Jenelle finds a new love interest. Chelsea endures her first day back to school. Kailyn and Jo get in a verbal altercation over her move to Delaware with Javi. Leah takes a break from everything going on and takes a vacation.

Tonight’s Teen Mom 2 season 5 episode 2 is going to be exciting, and you won’t want to miss. While you wait for our recap, hit the comments and let us know how excited you are about the season 5 episode 2 of Teen Mom 2.  Check out a Sneak peek video of tonight’s episode below!

Teen Mom 2 Season 5 Episode 2 starts off with Javi and Kailyn discussing her court date tomorrow.  She has to be cross-examined tomorrow at court to determine whether or not she can move to Delaware to be closer to Javi.  She is afraid that Jo’s lawyers are going to bring up her temper.  Jo already moved out of state without getting permission from court, so there is no reason why Kailyn can’t move out of the state.

Chelsea heads out to coffee with Aubree, and a friend of hers, to discuss school.  She is starting her new school tomorrow, and really excited about her new career.  Chelsea confesses that she really wants to set a good example for Aubree by going to school, since her Dad obviously isn’t setting a good example.  Meanwhile, Adam and his pregnant girlfriend are discussing what is going to happen with Aubree’s custody.  Adam plans to file paperwork with court to get set visitation with Aubree.  He is excited to start a new family with Taylor since she isn’t “as crazy as Chelsea.”

Leah’s husband Jeremy has been off from work since Adalynn was born, but it is almost time for him to go back to work.  So, they are going on a family vacation to Orlando before he returns to work.  Jeremy isn’t looking forward to going back to work and leaving behind the girls.

Jenelle has finished taking her abortion pills, and now she has to deal with her latest arrest.  She calls her lawyer and he tells her she is being charged with felony charges of selling heroin.  Her lawyer Justin tells her she could be facing months in prison.  Her lawyer warns her not to have any contact with Courtland.

Kailyn leaves Isaac with Jo’s family and heads off to court with her lawyer.  After spending an hour in court with their lawyers, the judge doesn’t make a ruling.  There is a misunderstanding about what county they live in, so they need to go before another judge.  It will probably be another month before they go back to court.

Jenelle’s Mom Barbara is concerned about her felony charges.  She thinks Jenelle needs to “grow up and start doing something with her life.”  Jenelle tells her Mom that she has met a guy on a dating website.  Barbara can’t believe that she is already meeting guys online and she is still married.  Barbara is scared that Nathan is going to be a serial killer.  Jenelle has been talking to him for a month and a half online, and she is going to finally meet up with him and play miniature golf.

Leah, Jeremy, and the girls are in Orlando getting ready to go to the pool.  Leah’s twin daughters are filling their bikini tops with tissues.  After they go for a swim Leah and Jeremy discuss the differences between the twins.

Chelsea and Megan are finally off to school, and running a little late.  They drop Aubree off at daycare and rush to class.  At their new school Chelsea will be learning how to give massages, spray tans, and do make-up professionally.

Jo meets with his lawyer after court, and learns that it will be another 30 days before they get another trial.  Jo is excited because that means Kailyn and Isaac will have to stay home for at least another month.  Jo’s lawyer thinks it is selfish for Kailyn to marry someone in the military and move all over the country, and deprive Isaac and Jo of quality time together.

Leah and Jeremy head to the amusement park with Ali and Alieeah.  Jeremy’s parents are on vacation with them, so they are watching Baby Adalynn.  After some coaxing they finally get the twins to ride on some of the rides.  Leah is dreading their vacation coming to an end, because she doesn’t want Jeremy to go back to work.

Jenelle leaves Jace with her Mom so that she can go get a pedicure with her friend Tori.  She tells Tori that she is “lonely at her Mom’s house.”  She tells Tori about the guy Nathan she has been talking online.  Tori thinks Jenelle is moving too fast, meeting guys online, when she is still married to Courtland.  Jenelle thinks that she has Daddy-issues, and she can’t be without a boyfriend because her Dad was never around.

Jo is bringing Isaac back to Kailyn’s house, but she is still annoyed with Jo about what happened in court.  She puts Isaac to bed and calls Javi and fills him in on what happened at court.  Javi isn’t happy to hear their case is being moved to another county.

Chelsea heads to daycare to pick up Aubree, and then they go home.  Her Dad Randy pays her a visit to see how her first day of school was.  Chelsea tells her Dad about her meeting with Adam, and that he wants to take her to the court.  She doesn’t want Aubree to have a baby brother or sister.

Jenelle meets up with her online boyfriend Nathan, and they go mini-golfing.  Nathan reveals that he was discharged from the Marines and then moved in with his Mom.  But, now he has his own place.  Jenelle tells Nathan about the time she and Kiefer ran off to New Jersey.  She confesses to him that she was addicted to heroin, but she has been clean for seven months.  And, it looks like Jenelle’s Mom was wrong, Nathan doesn’t appear to be a serial killer.