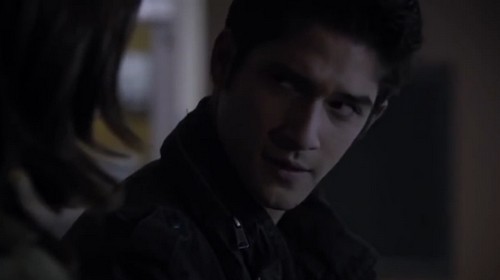 Tonight on MTV, the popular show TEEN WOLF returns with a new episode called “Echo House.” On tonight’s episode, an important Japanese artifact is sought by Scott and his friends; Stiles faces a difficult choice. Did you watch the last episode? We did and we recapped it here for you.

On the last episode, Deaton retrieved a poisonous lichen that aided him in paralyzing the Nogitsune within Stiles. Meanwhile at the hospital, an electrical wire swung out of control and injured several people, including Isaac, before Kira used her powers to subdue it. Elsewhere, Derek and Chris Argent were arrested by Agent McCall for the murder of Katashi after being framed by someone. Stiles, who was still missing, reappeared in the school basement. After finding a map of the cross-country trail, they realized that the path has been booby trapped by the possessed Stiles. The boys were successful in stopping the runners from being injured but Coach Finstock was shot with an arrow.

On tonight’s episode, Scott and the others seek an important artifact; Stiles decides to checks himself into the mental hospital, Eichen House.

The show opens up with Sheriff Stilinski driving Stiles to Eichen House. They get out of the car, looking a bit uncertain, and proceed toward the mental hospital. It’s night time. The tone is ominous. Scott pulls up on his dirt bike and can’t believe that Stiles is checking him into the same hospital that housed Barrow. Stiles wants Scott to make certain of one thing: That he never gets out of the hospital. he doesn’t want to deal anymore pain.

Inside the hospital, there are several patients with various afflictions. A nurse invites him into the hospital. He’ll be a patient for 72 hours. The place strangely resembles a jail and Sheriff Stilinski is struggling to leave his son in this place, but he eventually lets him go.

Stiles is shown to his room. On his way there, he sees a woman on the other end of the hallway. As he proceeds up the stairs, he witnesses an inpatient throw himself over the banister and hang himself. On the bottom floor, Stiles sees the Nogitsune, all bandaged.

Meanwhile, Argent talks with Dr. Deaton, Scott, and Allison. They mention a scroll that was written by Japanese mystics. This scroll might be able to help purge Stiles of the Nogitsune. Allison thinks she might know where to find it. Maybe she’s seen something like it before.

Stiles finds his room. There, he discovers that he has a roommate. His name is Oliver. Oliver says that this hospital is known as the Echo House because everything echoes. Evetually.

Stiles hears a woman on the phone. Her name is Meredith. He overhears her conversation. She says that she really thinks she should tell everyone the full story. Nobody knows what she’s talking about, but before she hangs up the phone (which has been disconnected), she says that “one of them is standing right behind me.” She’s talking about Stiles.

Stiles sees Malia. Malia proceeds to punch Stiles for no good reason. Malia is taken away and Stiles is restrained by the security guards. Raucous breaks out. As Stiles is being apprehended on the ground, he peers down a grate and sees the basement. He sees himself down there — a vision. This is the same basement that Lydia led everyone to a couple episodes ago. Ms. Morrell shows up and silences things. She shouts, “Enough!” Kneeling beside Stiles, she says, “You saw something, didn’t you?”

Derek and Chris Argent are locked up in jail, as they’re still being blamed for Takashi’s murder. All the evidence for the Takashi murder investigation is being moved. Chris and Derek talk about Stiles. Derek asks Chris if he’d feel any remorse killing Stiles. Chris says, “Stiles? Yes. A Nogitsune? No.”

Ms. Morrell is leading a group therapy session on guilt. Oliver, Stiles’s roomie, continues to suffers from a strange cough — as if he has a fly in his throat.

Ms. Morrell sees a strange mark appearing on Stiles neck. She takes him to her office and gives him some amphetamines to stay awake. She tells him that when the mark on his skin fades, the Nogitsune will return. She says if his friends don’t figure out what to do before that, then she’ll be forced to give him a lethal injection. Stiles asks if she’s planning on killing him. She says, “I’m going to do what I’ve always done: Maintain the balance of things.”

Stiles walks through the hospital and wants to get down to the basement. Oliver shows up behind him and says there’s no way he’s getting down into that room. The only one with the key is the head orderly. Stiles is going to play a trick on him to get that key. He needs to get into that basement.

Meanwhile, Allison, Lydia, Scott, and the twins are on a mission to acquire the mystical scroll that might be able to save Stiles’s life. Allison says that all the Takashi evidence is currently being moved in an armor car. They need its contents. They’re going to try to rob the transport. Piece of cake.

Stiles enters the bathroom. He takes his medication. He sees Malia showering. Stiles is wondering why she punched him. She’s mad for being pulled back into the human world. She wants to go back to being a coyote. Stiles says that he might know someone who might be able to help her change back — or at least teach her. He offers her a deal: He wants help getting the key from the head orderly.

Meanwhile, Team Scott formulates a plan to break into the armored car. They’re after Takashi’s silver finger. Allison thinks this might contain the scroll.

Stiles and Malia stage a fight in the hospital. Stiles grabs the orderly’s keys.

Chris is led into a room at the station. A woman is waiting for him. She says, “Hello, Kristoff.”

Stiles tries to unlock the door to the basement but is caught by the head orderly. He’s taken into the “quiet room.” They take his amphetamines and give him a sedative. This could prove disastrous for him.

Kira comes to meet Scott. She feels partially guilty for the role her mother’s playing the Oni summonings, so she wants to help in whatever ways she can. She shows off her new samurai sword skills. Scott says, “Okay. You’re coming.”

Meanwhile, the Nogitsune is haunting Stiles. He’s dreaming. Malia wakes him up. She says she broke the lock. She also says there’s another way to the basement — through the clothes unit.

Team Scott attempts to rob the car, but someone’s already beat them to the punch. A man jumps out of the back. Allison says that it’s Kincaid.

The woman talks with Chris and talks about families and honor. Chris wants to know if this has anything to do with Allison.

Scott tries to get the silver finger from Kinkaid, but he says the scroll inside is worth $3 million. Kira tries to thwart Kinkaid, but she’s thrown to the ground.

Malia and Stiles enter the basement. She asks him what he’s looking for. He’s not sure, but he says it has something to do with the strange kanji mark on the wall. He says it means “self.” Malia wants to know more about what’s going on. Stiles is apprehensive to reveal to much, but she tells him to try to remember that she’s a werecoyote who killed her family. She says she won’t judge.

Kinkaid beats up Scott. The twins come in and save the day.

Stiles and Malia find a whole bunch of files about the hospital’s past. She checks the lines on his back. They’re fading. Not a good sign.

They proceed to kiss and she says, “I want to try something else.”

They do it in the hospital basement.

Malia and Stiles, after their hookup, hear a strange noise in the basement. With a crowbar, he breaks down a wall. Behind it, they find a mummy — it’s the bandaged man, the one he’s been seeing. The Nogitsune. Malia reaches into the mummy’s bag and pulls out a small photo. She asks Stiles if he recognizes the people in the photo. He recognizes one of them. He says he needs to get this to Scott ASAP.

But Oliver comes in and tasers Stiles and Malia. He stole the taser from the orderly.

Stiles asks Oliver what he’s doing. Oliver proceeds to get a drill. He says that this hospital used to conduct trephination experiments — boring holes in patients’ skulls “to let the evil spirits out.”

Oliver has tied Stiles to a chair. Oliver coughs up blood — and what looks to be a small fly. They’re interrupted by a voice. It’s the Nogitsune. The Nogitsune has orchestrated all of this.

Stiles tells him to let Malia go. He says, “Let me in.”

Oliver proceeds to bring the drill to Malia’s head. The Nogitsune tells Stiles to let him in and he’ll let Malia live.

Stiles, crying, lets the Nogitsune inside him.

Scott delivers the scroll to Dr. Deaton, who says the only way to expel a Nogitsune is to “change the body of its host.” Scott thinks that they need to turn Stiles into a werewolf.

Malia checks herself out of the institution. She goes to look for Scott McCall. Ms. Morrell says that she can tell him where he is.

As Malia leaves the hospital, her eyes glow blue.