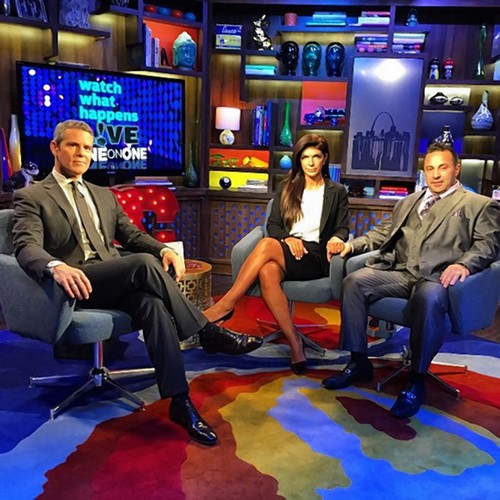 Teresa Giudice has given up her pre-sentencing tour of contrition, not that it helped her in the end. Teresa got sentenced to fifteen months in prison, and the only bit of leniency she got from the judge was in spacing out her punishment – and that was only for the sake of her children. Teresa is not getting an iota of sympathy from anyone, and nor should she. She broke the law, and now she’ll pay the consequences, Real Housewives or no Real Housewives.

Now, the Real Housewives of New Jersey and Bravo are jumping on this opportunity like a pack of blood thirsty dogs, perhaps seeing a chance to cement the show in people’s minds and increase publicity. The ratings for all the shows have been dropping drastically over the past few years, but Teresa’s jail sentence has definitely increased public interest in the show. As such, it makes sense that Teresa had her first post-sentencing interview on Watch What Happens Live with Andy Cohen, who also happens to host the Real Housewives.

In her first public comment regarding her jail sentence, Teresa Giudice explains, “I, of course, I was shocked. I mean, it was very unexpected. I don’t even know what to say.”

She claims that she’s been ‘in denial’ for the past few months, and that’s why the sentence took her by surprise. I, on the other hand, have another theory that’s way more plausible than shock – Teresa Giudice had been trying for a very long time to butter up the court and judge, but went about it the wrong way. Teresa probably hoped that delaying the proceedings would allow her to built an effective sympathy campaign with the media, but it just backfired. Instead, the media just criticized Teresa for sticking by Joe Giudice’s side and throwing parties before she got sentenced, and basically not showing an iota of remorse in the wake of her fraud charges. Of course, Teresa being Teresa, she probably didn’t realize that sometimes, breaking the law comes back to kick you in the ass in the worst way possible. I guess she learned that, huh?

Teresa also opened up about her daughter Gia Giudice’s reaction to her parents’ prison sentence, explaining that Gia has committed to helping Joe take care of her sisters while she’s in prison. That statement was so clearly made for the audience’s benefit – it sucks for her kids, but stop dragging them into a conversation about YOUR breaking the law. The time for sympathy mongering is over.