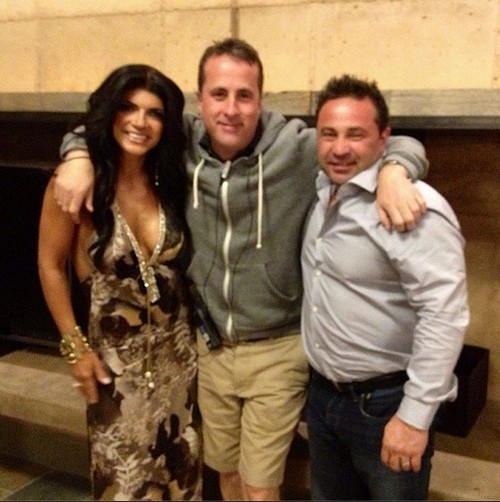 Wow has Teresa Giudice taken a tumble. Once the golden girl that The Real Housewives of New Jersey revolved around, now Teresa finds herself at the top of the short list of ladies that may not survive to see another Bravo paycheck after the season currently airing wraps up. While fans tune in to be amused or disgusted, depending on the story line, this show has meant serious business for everyone involved. According to the Aug. 11th print edition of In Touch Magazine the powers-that-be are ticked off because Teresa has refused to do the normal amount of publicity for the show.

Think about it, in previous seasons of The Real Housewives of New Jersey Teresa never had an issue not only pimping herself out but also the entire Giudice family too. She was shameless with her self promotion but those days are over. Girlfriend is probably more than a little embarrassed and every time she makes a public appearance she is making herself vulnerable to questions that she would rather not answer. It’s no wonder Teresa is bowing out of personal appearances but Bravo is none too happy.

Since the blood is already bad Teresa Giudice is putting her own spin on it and claims that she is being treated badly by the network that once dotted on her. She’s also teasing that maybe she’ll be on another show instead of The Real Housewives of New Jersey next season. I wouldn’t hold my breath for that to happen but do you think that Teresa’s days are numbered? Tell us your thoughts in the comments below!