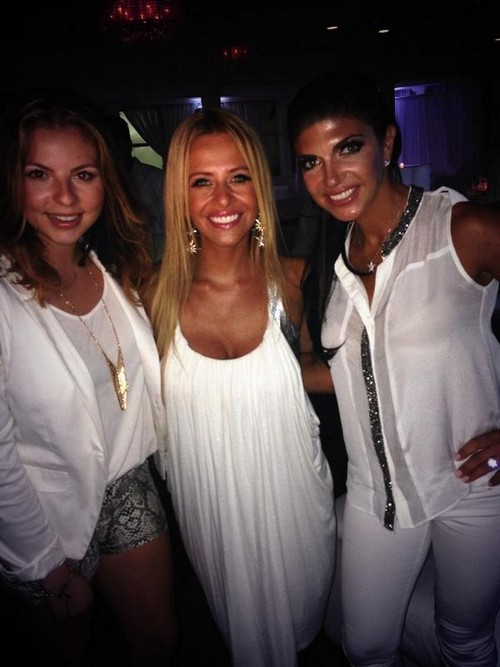 Teresa and Joe Giudice returned to The Real Housewives of New Jersey this season 6 looking for sympathy since even they realized that garnering real support would be a tough sell. The two are currently awaiting sentencing after pleading guilty in a New Jersey court to a laundry list of federal crimes. The couple was originally scheduled to be sentenced in early July but they were given an unexpected continuance after Joe’s father, Frank Giudice, keeled over and died at the family’s home in Towaco, NJ.

While Bravo executives have been ticked off at Teresa because she is supposedly not doing everything that she can to promote the new season of RHONJ, she and Joe have turned up to events that suit them. According to the Aug. 4th print edition of Life & Style Magazine the couple attended a July 13th screening of the show at Pure Restaurant in Parsippany, NJ. Frank was featured in the episode leading both Teresa and Joe to cry at the sight of him.

They claim not to want sympathy but the fact of the matter is that these two only turn up when the situation can be used to say something positive about them. They know they are going down so they want us to now be talking about how stoic they are in the middle of constant chaos. It would be even better if we all forgot that both Teresa and Joe are facing sentencing on Sept. 23rd because they lived criminal lives for the better part of a decade. Sure, they claim to be worried about their kids now, but being around to raise them wasn’t a thought while committing bank fraud, right?

Do you think that Teresa and Joe are disgusting? Do you think that Bravo realizes that featuring repulsive criminals on The Real Housewives of New Jersey is a bad move?  Tell us your thoughts in the comments below!