BY Amanda Austin on March 19, 2014 | Comments: one comment
Related : Recap, Television, The Americans 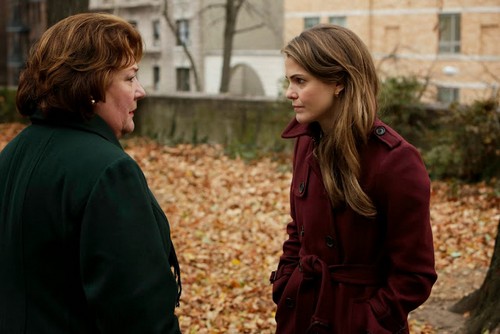 Tonight on FX another new episode of THE AMERICANS is on for you to enjoy. In “A Little Night Music” an old friend complicates matters for Philip and Elizabeth. Meanwhile, Philip’s cover is threatened by Martha.

On last week’s episode Philip and Elizabeth completed their next mission – but not without complications – and Philip’s fears about Elizabeth’s readiness for action deepened. Stan tracks the KGB walk-in which led to much praise at work and a deepening of his attachment to, and dependence on, Nina. Meanwhile, Paige snoops into her mother’s family background and Oleg began to scrutinize Nina’s secret operation.  Did you watch the last episode? If now then you’re in luck because we have a detailed recap of it for you right here.

On tonight’s episode Just when Philip and Elizabeth think they have a quiet road ahead, an old friend returns to complicate things. Not only do they have to intercept a target who could prove valuable to the Soviet Union, but they also have to take on an important rogue mission without the support of the Centre. Divisions inside the Rezidentura deepen between Oleg and Arkady and there’s an upheaval at the FBI as the chickens come home to roost for Agent Gaad. Meanwhile, Martha’s frustrations threaten to blow Philip’s cover.

Tonight’s episode looks like it is going to be a great episode and you won’t want to miss it, so be sure to tune in for our live coverage of FX’s “The Americans” Season 2 episode 4 at 10 PM EST! While you wait for the recap, check out our sneak peek video of tonight’s episode below!

Tonight’s episode of The Americans beings in church. Paige’s new friend Kelly takes her down in the basement to sing hymns with the youth group. Paige tries to sneak into her house, and her parents catch her, she lies and says her friend had boy troubles, she likes a Junior.

Phillip is at a Jewish church, scoping out a man named Anton, he declares he is “not recruitable.”

The next day Phillip and Elizabeth head to work, and they see Claudia walking across the street. They stop and she climbs in the car. The Center has pulled the people on their kids, and Claudia says “they are scared.” But, Claudia wants them to help her personally find Emmett and Leann’s killers. They owe it to Emmett and Leann. Claudia has a theory, she thinks that Andrew Laric, a Navy Seal that is setting up a unit may be responsible. He is a homosexual and Emmett and Leann were blackmailing him. She gives Phillip’s the photos and information on Andrew, and tells Elizabeth she is glad she is back.

Stan and Frank are under investigation for the shooting of the KGB agent.

Phillip and Elizabeth are discussing how they are going to contact Brad Mullen, Andrew Laric’s right hand man. Elizabeth says she will handle it.

Frank reveals to Stan that he is being “layered.” They are bringing in someone over him, Jim Hallowell will be running CI. Stan thinks it is because of the shooting, but Frank informs him that they are “after bigger game.” Stan is small fish to them.

Elizabeth goes undercover and bumps into Brad Mullen at a music store. They head into a sound proof booth to listen to a record of Mozart together.

Stan goes out to the bar and has drinks with Phillip. Phillip is rambling about “sprucing up his office” and Stan blurts out that he is having an affair. Phillip is the first person that Stan has ever told. He comforts Stan and tells him that “marriage is tough.” Stan blames it on his job taking a toll on him, and forcing them to live separate lives. He tells Phil he is “lucky to be a travel agent.”

Oleg gets a new security clearance, so that he can access Arkady’s files, he thinks he is hiding something form him. Arkady is not happy, he thinks Oleg is abusing his family connections, and is acting like an American to get his way.

The next day Phillip reveals to Elizabeth that Stan finally confessed to him about his affair.

Arkady pays Nina a visit, he reveals to her that Oleg pulled a few strings and got a higher security clearance and he had to turn over his files. Oleg will know about the Beeman Operation.

Elizabeth checks into a hotel with Brad Mullen. Mullen confesses that he has “never done this before” and he is “kind of a loner and not the usual military type.” Elizabeth reassures Brad that she likes him, they begin to kiss and then Elizabeth tells him to stop and she wants to “take things kind of slow.” She starts crying and picks up her stuff to leave and tells Brad she will call him as she walks out the door.

Phillip follows Andrew and learns that he has a mistress, he is working on getting her address. Elizabeth says that everything is a “piece of cake with Brad.” She heads to Paige’s room and catches her reading the Bible, and then discovers she has been sneaking to Reed Street Church with her friend Kelly to meet with a youth group and discuss how “messed up” her family is.

Elizabeth heads out to lunch with Brad, she tells him that she was attacked and raped by a Navy Seal on leave that she met at a bar. She describes a detailed and disturbing account of what happened to her when she was raped, and says that the Navy is protecting him and told the cops he was on a mission when it supposedly happened. She tells Brad that his name was Andrew Laric, and Brad says he is going to get Laric’s Navy files so that she can show them to a lawyer.

Phillip spends a “lazy morning” with Martha. And, then Martha calls her Mom and talks to her mother, so Phillip (aka Clark) uses it as an excuse to storm out. Then he curses her out for washing her hair in the kitchen sink. Martha is on to Clark though. She accuses him of picking a fight with her just so that he has an excuse to leave.

Elizabeth meets up Claudia, and Claudia lectures her that she is “not ready for this mission” and she is “too afraid.” Elizabeth calls her out and says she is up to something and she wants to know what it is. Claudia says “she doesn’t want to lose anyone else” and then storms off.

Elizabeth meets up with Brad and he says he “doesn’t have the files.” He says people were watching him whenever he went to make copies and he chickened out. Elizabeth charms him in the car, and tries to convince him to try again.

Oleg confronts Nina and reveals that he has read all of her files about Stan Beeman. He tells her he sympathizes for her, and he knows that it must be hard on her to have to deceive with her body. Nina says she doesn’t need his sympathy.

Martha heads home and takes out a tape recorder, and calls Clark and leaves him a message and tells him that they need to talk.

Elizabeth and Phillip are sitting in their car under cover in the middle of the night, and arguing about Paige’s new religion. She is upset that Paige has been sneaking off to church and now she is praying before dinner.

Anton walks out of a building and Phillip hops out of the car and throws him in the trunk. Before they can get away a man and a woman come out of nowhere and start attacking them. Phillip has the woman down, but then Elizabeth goes black out crazy and nearly kills the man. Phillip walks away from the woman to stop Elizabeth, and the woman hops in their car and drives away with Anton in the trunk. Elizabeth and Phillip are screwed, they are stranded in the middle of the street in the middle of the night with a half dead man, and no car.