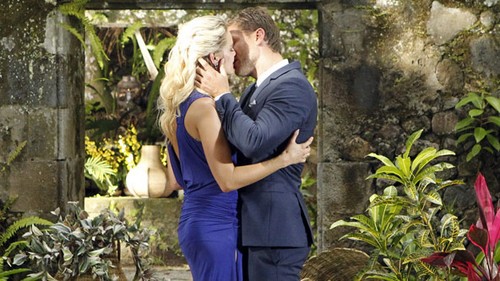 Juan Pablo may have ‘chosen’ Nikki Ferrell as the winner of the Bachelor, but he still hasn’t proposed to her. In fact, he hasn’t proposed to anyone nor has he given any indications that he even plans to propose to anyone. So there are two conclusions that fans are drawing from his indecisiveness – either Juan Pablo’s a douche, or he’s covering up the fact that he’s gay. Or both.

Many fans took to Twitter to speculate on Juan Pablo’s sexuality, with one fan writing, “Juan Pablo isn’t 100% sure he is in love… well I’m not sure if he is 100% straight.” Another wrote, “Juan Pablo knew what he was doing the whole time ! I think he’s gay.”

Another wrote that they thought that the plot twist in the finale would be the reveal of Juan Pablo’s sexuality, explaining, “I thought Juan Pablo’s big surprise was gonna be that he was gay… Oh well.” Lots of fans are under the belief that Juan Pablo is gay, and that’s the biggest reason he’s acting like a ladies man but refusing to propose to Nikki at the same time.

You know, it wouldn’t be shocking to find out that Juan Pablo is gay. A lot of gay men who are in denial about their sexuality often make homophobic remarks, just as Juan Pablo did, and they also sleep around with tons of women. And regarding the fact that Juan Pablo already has a kid – well, plenty of gay men have kids with women, and a lot of them don’t even acknowledge the fact that they’re gay in their lifetime. It’s still considered a taboo to be gay in many cultures, including many parts of South America, where Juan Pablo is from.

What do you guys think? Could Juan Pablo be gay? Let us know your thoughts in the comments.