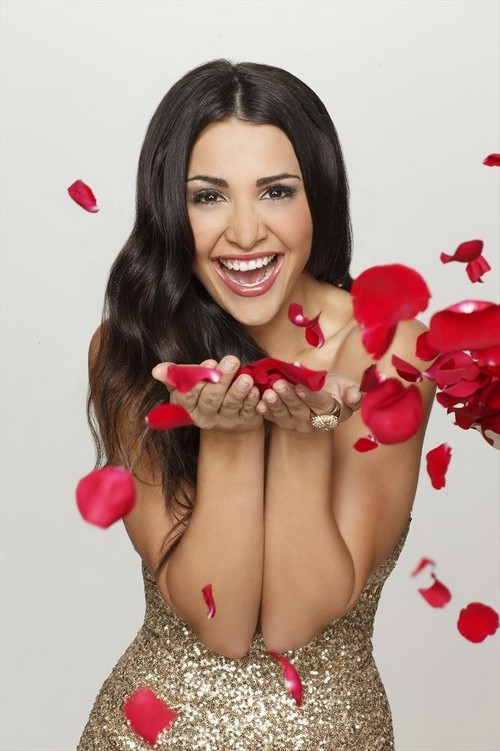 The Bachelorette Andi Dorfman airs tonight on ABC.  In this fourth episode Andi heads to New England with the 13 remaining bachelors. Singer Jon Pardi serenades Andi and her date; the men compete against all-star WNBA players; and Andi goes on a steam-train ride with one suitor and rappels down a hotel with another.

On the last episode, Nick Viall went on a one on one date while the group date included 12 guys (Cody, Andrew, Marquel, Brian, Tasos, Pat, Bradley, Eric, Brett, Ron, Josh, & Marcus) at Paseo Nuevo Mall Santa Barbara with Boyz II Men. The date was not a competition. There was no “winning” team. It was just twelve guys split up into two teams getting on stage and taking turns singing “I’ll Make Love To You” with Andi in the middle. JJ O’Brien also got a one on one date, he and Andi dressed as old people and played practical jokes on citizens. At the Rose Ceremony Bradley Wisk and Brett Melnick were sent home while Ron Worrell left because of his friend dying.  Did you watch the episode?  If you missed it we have a full and detailed recap, right here for you.

On tonight’s episode, Dylan Petitt gets a one on one date and they spend all day on the Essex Steam Train. On the Group Date: 11 guys (Chris, Brian, Nick, Tasos, Marquel, Andrew, Pat, Nick, Eric, JJ, & Cody) play basketball against each other with the WNBA’s Connecticut Sun making an appearance. Brian being a former basketball player and current coach, will obviously be the best player in the group and there’s no surprise when he gets the group date rose. Marcus Grodd also gets a one on one date, he rappells down the side of Mohegan Sun with Andi.

Tonight’s episode is going to have people talking and you are not going to want to miss a minute of it. The Bachelorette airs tonight at 8PM so don’t forget to come back for our live recap then!

Tonight’s episode of The Bachelorette kicks off in Connecticut, the guys arrive at the Mohegan Sun hotel where they will be staying during their time on the East Coast. A date card arrives at the hotel, and reveals that the next guy to go on a 1-on-1 date with Andi will be Dylan. Andrew thinks there is a 50 % chance that he might not get a date rose because he needs to “get out of his own head and open up more.”

Dylan heads out on his date with Andi and she reveals that they will be spending the day on the Essex Steam Train. They board the train and head on their date down the Connecticut River. Dylan kicks off the date by confessing that he was in an eight year relationship with one girl, and she got engaged to someone else the day after his brother’s funeral. So far, Andi thinks that Dylan is nervous and he has a huge past that he isn’t opening up about.

Back at the hotel the group date card arrives and says “Who’s got game?” JJ, Chris, Andrew, Eric, Nick, Marquel, Cody, Tasos, Brian, Patrick, and Josh will be going on the date. Josh is devastated he is going on the group date because he was really hoping for the other 1-on-1 date.

Andi and Dylan sit down for a romantic dinner together on the train, and Andi tries to get him to open up more to her. He shares his story with her about his brother and sister both passing away after drug overdoses. He breaks down in tears and can barely finish the story, but Andi comforts him and encourages him to keep talking. Andi is touched that Dylan shared his story with her, and feels guilty that she brought him on a 1-on-1 date with her to his hometown because it has obviously brought up bad memories for him.

At the end of the date Andi presents Dylan with a date rose and stresses to him that it is not because she feels bad for him, but because he was willing to share his story with her and open up to her.

The next day it is time for the group date, and the guys head down to the arena in the hotel and are thrilled to see Andi waiting for them on the basketball court. Andi surprises them with a team of WNBA players. She reveals that they are going to play a game of guys on girls. The girls “completely schooled the guys.” So, Andi decides to split the guys up in to two teams to play against themselves. The winning team gets to party with Andi all night, and the losing team has to go back to the hotel.

Nick, Cody, Andrew, Eric Brian and Marquel make up one team. And, they definitely have a leg up seeing as how Brian is a basketball coach. Josh, Chris, Patrick, JJ and Tasos are on the other team. Andi is shocked to see how hard they are playing and all of the testosterone on the court. It’s half-time and the teams are both tied, and both teams are convinced they are going to win. After half-time Brian’s team steamrolls the white team and shuts them down, with Brian leading them. Josh Murray and his team are devastated that they have to go back to the hotel, and the other guys get to hand out with Andi.

Andi and the guys get changed and she sits down with the six members of the winning basketball team and toasts with them. Then she slips away with Eric to spend some 1-on-1 time with him. She thinks that their relationship isn’t progressing. She confesses to him that she doesn’t think they are moving forward, and he agrees. She thinks that it is weird that she doesn’t know anything about his family, just his work. He agrees and tells her about his family and how he gave up his religion, because he was raised Mormon. After their conversation Andi feels like they are back on track and their spark is reignited.

Andi spends some 1-on-1 time with Brian next and they head back down to the stadium, which is now empty. He gives her a quick basketball lesson and then they sit down and chat for a while. Andi bets him he can’t make a half-court shot, and he does on the first try. Brian is devastated when they head back to the group, because he froze up and didn’t have the nerve to kiss her.

Nick steals some private time with Andi next, and he doesn’t waste any time kissing her. Andi confesses that she feels the most comfortable when she is with Nick. Nick believes that he has found someone he can spend the rest of his life with.

Next Andi hands out the group date rose to Brian since he was MVP on the court today.

The next day it is time for Andi’s 1-on-1 date with Marcus. They head to the roof of the Mohegan Sun and Andi reveals to him that they are going to rappel down the side of the thirty story tell building. Andi begins panicking as their instructors strap them in because she is afraid of heights. But, Marcus talks her through it and encourages her.

After they make it to the bottom of the building Marcus and Andi head out on a romantic dinner together. Andi can’t believe how much of a catch Marcus is. He opens up to her and confesses that his last relationship ended badly, and tells her that she is the first girl that he has opened up to in a long time. At the end of their dinner Andi rewards Marcus with the date rose. Afterwards they head to a concert in the casino and dance on a platform together. While they are dancing Marcus confesses to her that he is falling in love with her.

The next day Andi receives a love letter from a “secret admirer.” She has no idea which guy it is from though. The guys get dressed and head to the cocktail party to see Andi one last time before the rose ceremony. Andi arrives and greets the guys, d then spends some 1-on-1 time with Tasos. Next Brian steals Andi and takes her back to the basketball court, he wants a redo because he didn’t kiss her the last time they were on the court.

Eric scores some 1-on-1 time with Andi next, and he wants to talk about their “misunderstanding.” He feels like it is the opposite and Andi hasn’t been real with him. Then he informs her that he came on Bachelorette to meet a real person, not a TV actress. Andi is obviously taken aback, but he continues. He says that she has a poker face on during the day and he can’t read her. Andi confesses that she isn’t comfortable and natural all of the time. She bursts into tears and says that he doesn’t realize how hard she works to get to know all of them and how exhausted she is. Andi tells him that is obviously isn’t going to work our between them because he keeps calling her fake, he apologizes and says that he is leaving.

Andi marches back in to the room where the other guys are and tells them that if any of them aren’t taking this seriously and want to leave then they should, and she barges out.

Next Chris Harrison taken the screen and announces that we had just watched Eric Hill’s last scene on The Bachelorette because after he returned home he passed away. Normally they would show a Rose Ceremony, but they don’t think that would be appropriate and they would rather spend the last ten minutes of the show talking about Eric Hill.

Andi admits that the first night and the first date, she was falling for Eric. But, unfortunately they weren’t as open with each other as other couples and their potential relationship was stalling. Eric’s accident happened while Andi was busy filming hometown dates and wasn’t able to say goodbye to him. When she learned that Eric had passed away it definitely changed her, and it put everything into perspective and made everything else seem irrelevant.