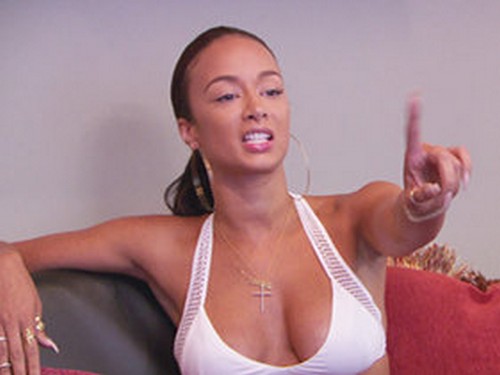 On last week’s episode with the group still reeling from the effects of Jackie’s event, Sundy decided the ladies needed a getaway to Palm Springs-but for the good of the group, Brittish was not invited. Meanwhile, Brittish’s fiancé, Lorenzo Gordon, negotiated a deal to play basketball overseas, leaving Brittish behind.  Did you watch last week’s episode? If not we live blogged it and there is a full recap for you right here.

On tonight’s episode the Palm Springs getaway is anything but relaxing as tensions between Draya and Sunday erupt into full-blown mayhem. And in a tearful confession, Draya tells Jackie her daughter may not be as innocent as she thinks. Back home, Lorenzo surprises Brittish with news about his career.

At the Palm Springs house, Malaysia is happy to see Brittish is not there since Brittish always seems to start trouble. Jackie is tense about seeing Draya for the first time after telling her about Orlando going after her daughter. Jackie and Sundy get started right on her and tell her it seems like she doesn’t want to be there. Draya keeps telling them that she wants to be there. When Sundy keeps pushing, Draya tells her she doesn’t want to be there. Sundy tells her she should just go then. It was very obvious that Sundy wanted to start something with her.

After starting the verbal fight, Sundy heads for the kitchen. When Draya says under her breath for her to take her “ratchet ass” into the kitchen, Sundy asks who said she needs to take her ass in the kitchen. Jackie actually clarified that Draya said “ratchet ass” and all hell starts to break loose. Sundy starts calling Draya by her former “stage” name Miami. Sundy tells her that she didn’t even tip her that night she saw her in the strip club. The argument turns ugly when the ladies start bringing up each other’s kids. Sundy challenges Draya and Draya comes across the couch and a fight begins. Producers step in to break it up. Jackie goes chasing after Sundy but she won’t open the door or answer her.

Jackie comes to Draya and asks what is going on after they fight. Draya tells her to just STOP. Draya tells Jackie she is tired of Sundy talking shit. Draya asks Jackie why she even brought Sundy in their group. Draya tells Jackie that everyone who gives her advice about her kids thinks they are perfect. Jackie opens up about her daughter and breaks down. She tells Draya she is a great mother. Both women break down. It is a very emotionally-charged moment. All the ladies are crying. Malaysia tries to comfort Draya by telling her she is a good mom and that her son is well taken care of.

Meanwhile, Sundy finally lets Jackie in but she is still heated and says she won’t come out of the room until Draya is willing to go outside with her to really get their fight on. Grow up, Sundy!

Jackie comes out while Malaysia is talking to Sraya. All the women begin to cry again. Seems like these ladies do much better when it is just them and Brittish and Sundy are not in the mix. Draya shares that she is “broken” right now. Draya is upset about Jackie and Sundy sharing the news about Orlando the way they did instead of Jackie just coming to her privately.

Brittish talks about Lorenzo being 5000 miles away. They are video chatting. Lorenzo shares that all the players on his team are very young, the coach was pretty cold to him, and the coach tried to change his shot..the one he is known for. He doesn’t feel like he is in the right place. He tells Brittish that he is coming home tomorrow. He didn’t sign the official contract yet, so he can come back. Brittish is happy he’ll be back.

Draya pulls Jackie aside and tells her that she needs to have a talk with her. She begins talking about the Orlando situation and how she wasn’t happy with him. Draya tries to share with Jackie the version of the story that Orlando gave her. She tells Jackie that Chantel came to meet up with Orlando and didn’t look like the pics she had sent him prior to the meeting. She basically shares that Chantel just wasn’t Orlando’s type and she likely was upset about that. She explains that Chantel was seeing Orlando’s friend, not Orlando. She basically told her the same story Orlando gave her. It is obvious from Jackie’s face that she is NOT buying it.

Jackie wants Draya to share some of her feelings with Sundy is well since Draya thinks everyone is judging her. Jackie calls Sundy out and she comes out. She has an evil look in her eye and throws a drink on Draya to start yet another fight. Maybe the gilrs can get a two-for-one deal on anger management classes for Sundy and Brittish.

Back in LA, Brittish tells her sister (via phone) that Lorenzo is coming back. Shortly after, he arrives home and tells her about how he didn’t like the situation and will be looking to play elsewhere.

Sundy gets in the pool and throws off her bathing suit. Jackie pulls her towel off when she gets out and Sundy runs through the house naked.

Later, at dinner. The girls are talking about Brittish’s tea party and Draya was laughing about what Malaysia had said. Sundy didn’t hear what she was laughing about and said “what Draya?” with an attitude. Draya responded and Sundy goes in on her again saying that the way she responded made her sound like she just got out of jail. Sundy already has a black eye…she better be careful!

Draya shows how much she has matured by suggesting to Sundy that they should try to get along and Draya says she will help Sundy any way she can. Draya seems to break through and Sundy begins to shed some tears as well.

The next morning, Draya, Brandi, and Malaysa are sittingon the couch about ready to go. Sundy and Jackie come out and Draya sees the damage she did to Sundy’s eye. The ladies talk about the weekend and how they are disappointed they didn’t get along. Sundy has a “whatever” type attitude about it after Malaysia shares how they should all be able to get along. Draya walks away saying she cannot deal with it any more.

Next week is going to be another crazy episode of your favorite ladies! Only a few more episodes before the reunion in April. For all you serious BBWLA fans, you can submit questions via VH1 that might be chosen for the reunion special. For all of you ladies who love Malaysia’s style, VH1 provides a link to Malaysia’s Closet, where she sells clothing she has sported on the show. Check out VH1 and see you here next week on CDL for another recap of our favorite drama-filled show!