The Bold and the Beautiful Spoilers: Does Aly Get Intimate With Oliver – Is He Using Aly Because She’s A Forrester? (VIDEO) 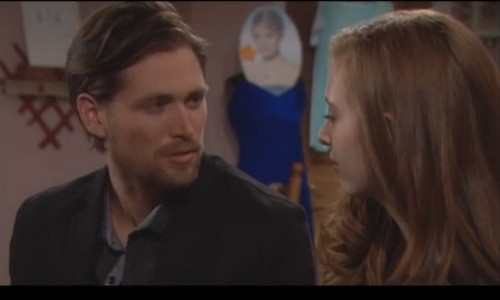 Aly’s still an incredibly volatile presence on the Bold and the Beautiful, but that hasn’t stopped her from catching Oliver’s eye. Oliver, who’s also Hope’s ex-boyfriend, seems to have taken a liking to Aly, even though he doesn’t know about her turbulent emotional history.

Zack Conroy, who plays Oliver, explains, “Everyone else has seen one side of her, but Oliver hasn’t seen that yet. He doesn’t know yet about Aly’s childish, crazy side.” Of course, Aly’s also desperately trying to keep her composure around Oliver, lest she scare off her new crush. Ashlyn Pearce, who plays Aly, adds that even though Aly’s very shy around Oliver, she’s still trying to act more mature – even though it’s outside her comfort zone.

She adds, “Everyone in her family sees Aly as this troubled little girl, in a way, but Oliver sees in her the same qualities, the same sort of potential, that he once saw in Hope.”

Hmm… was she giving us a hint there? There’s a possibility that Oliver is just using Aly, and only dating her because he wants to become a Forrester one day. But if he’s just using Aly as a social climb, one wonders how Aly will react if/when she finds out.. probably not in the sanest way, no?

Of course, he could genuinely be interested in Aly, which will probably not be all sunshine and roses either. If we look at Aly’s lack of experience in the love department, her emotional issues, plus Oliver’s bad luck with his ex-girlfriends, this relationship is bound to implode – and sooner rather than later.