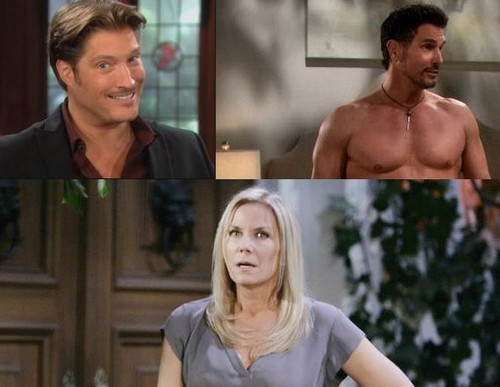 When The Bold and the Beautiful spoilers were leaked months ago revealing that Sean Kanan was returning as Deacon Sharpe on the CBS soap opera, we knew it would only be a matter of time before Deacon began trying to win over Brooke Logan. After all, he is that predictable, and he and Brooke are like Ridge and Brooke, they can’t seem to leave each other alone.

Bold and the Beautiful spoilers tease that Deacon devises a plan to stop Brooke and Bill’s wedding and get back in Brooke’s good graces. Apparently Deacon gets caught up in Ridge and Bill’s drama, and when Brooke doesn’t believe that Bill orchestrated Ridge’s fall in to the Persian Gulf, Deacon decides to lend Ridge a hand and help him and Katie prove that he is telling the truth by going through Bill’s financial records. We’re not exactly sure how Bill’s financial records will prove that Justin dumped Ridge out of the helicopter, but perhaps there is a paper trail from Bill renting the helicopter in Abu Dhabi?

Deacon and Bill Spencer have never seen eye to eye, and after Bill manipulated Deacon before and tried to force him to ruin his own daughter’s wedding a few years ago, it makes complete sense that Deacon is willing to help Ridge prove that Bill is up to no good. In a sense Deacon is killing two birds with one stone. He’s getting revenge on Bill for what he did to him two years ago, and simultaneously getting on Brooke’s good side, by helping her uncover the truth about Ridge’s accident in Abu Dhabi.