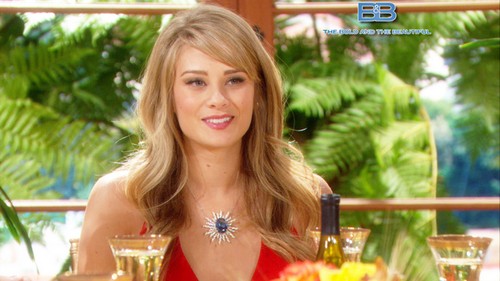 The Liam-Hope-Wyatt love triangle on The Bold and the Beautiful has been an integral part of the CBS soap opera for several months now. According to Bold and the Beautiful spoilers, it is far from over though. Recently Hope made a decision and chose to be with Liam, and sent Wyatt packing. Wyatt promised his half-brother Liam that he would back off and not interfere with Liam and Hope’s relationship, but it turns out he had no intention of keeping his word.

On the July 29th episode of Bold and the Beautiful, Wyatt presented Hope with the Hope For The Future Diamond he just inherited. Hope accepted the extravagant gift, but Ivy recorded their entire moment on video, and Liam is not happy about it. He informed Hope that she can’t accept the diamond, and must return it to Wyatt. They say diamonds are the way to a woman’s heart, and Wyatt might be on to something, because the last thing Hope wants to do is part with the diamond.

According to Bold and the Beautiful spoilers, Wyatt will hold a press conference at Forrester Creations and announce to the world that he has given Hope the Hope For The Future diamond before Hope has a chance to return it. So, Hope will have to betray Liam at the press conference and accept the diamond, or follow Liam’s orders and give up the diamond in front of everyone. If Hope accepts the diamond, then she is basically publicly choosing Wyatt over Liam, and all hell will break loose on Bold and the Beautiful.